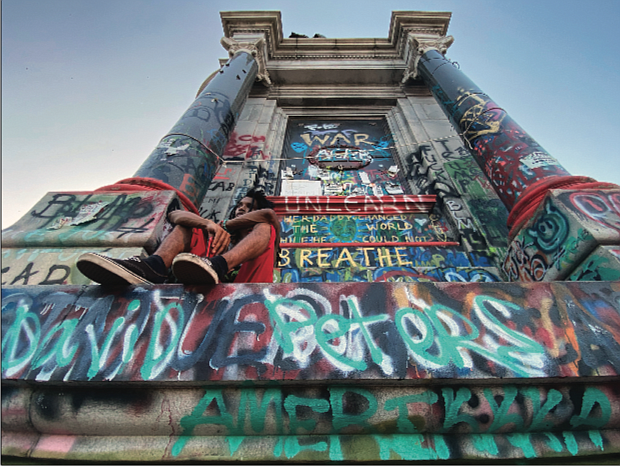 A man perches on the pedestal of the Lee statue to watch the Elegba Folklore Society’s “Reclamation Drum Circle,” a birthday tribute to Emmett Till, whose lynching in 1955 in Mississippi helped propel the Civil Rights Movement. 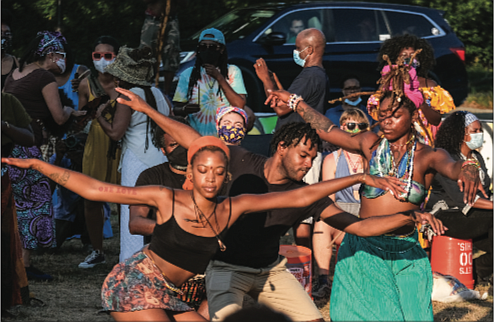 Members of the audience dance to the beat of the drums of the Drum Circle. 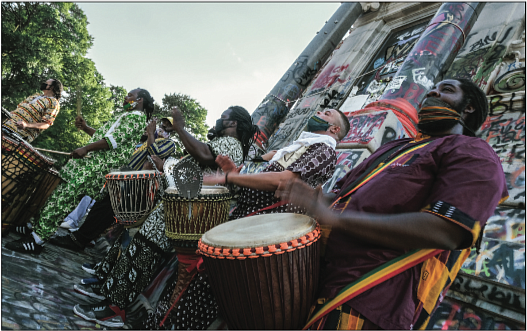 The “Reclamation Drum Circle” add rhythm and meaning to the tribute to Emmett Till. 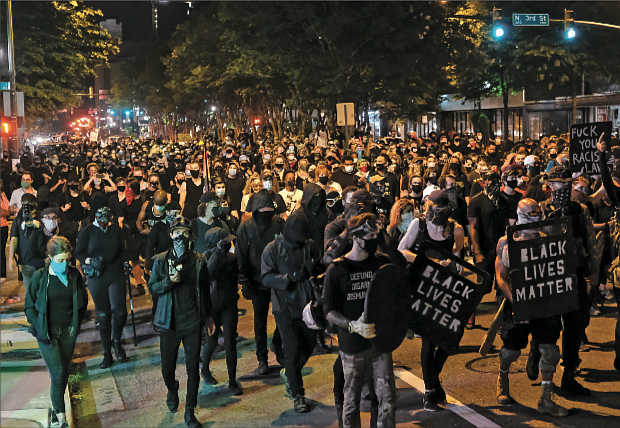 About 1,000 protesters marched through Richmond to show solidarity with demonstrators in Portland, Ore., where federal officers are using questionable force with those they detain or arrest. 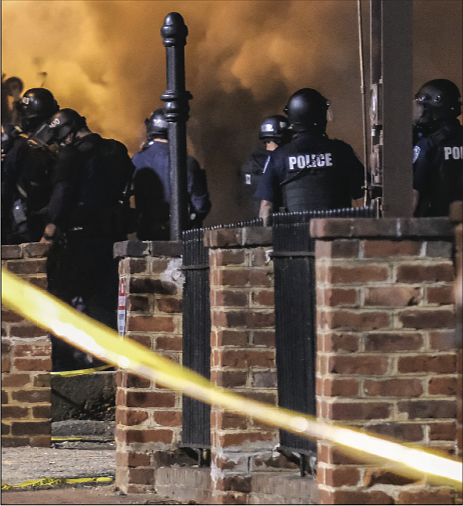 Smoke from a burning dump truck rises with tear gas in front of police officers gathered at Madison and Grace streets to protect the city police headquarters. 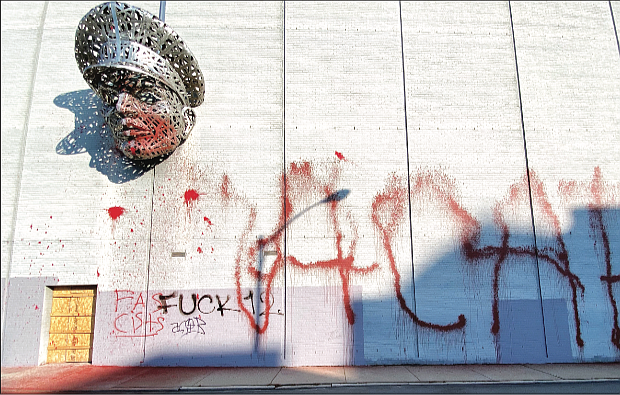 The Thin Blue Line, a 12-foot-tall steel sculpture mounted on the Jefferson Street side of Richmond Police Headquarters in Downtown, bears spray paint after Saturday’s demonstration. 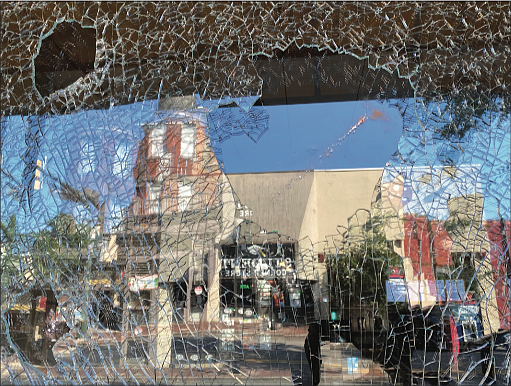 A large plate glass window at Au Bon Pain, 944 W. Grace St., was shattered during the spree of violence began Saturday night and continued into the early morning Sunday. 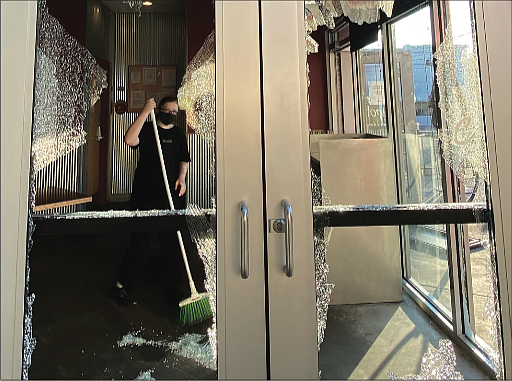 A worker at Chipotle Mexican Grill, 810 W. Grace St., sweeps up broken glass Sunday morning. The windows were shattered during a wave of vandalism that began late Saturday and continued into early Sunday. 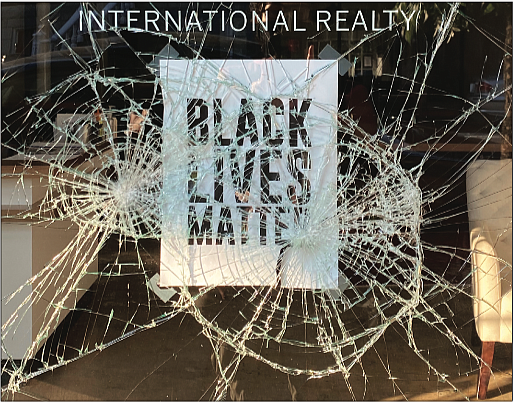 The window was shattered at this real estate office in the 1500 block of West Main Street despite the Black Lives Matter sign posted. 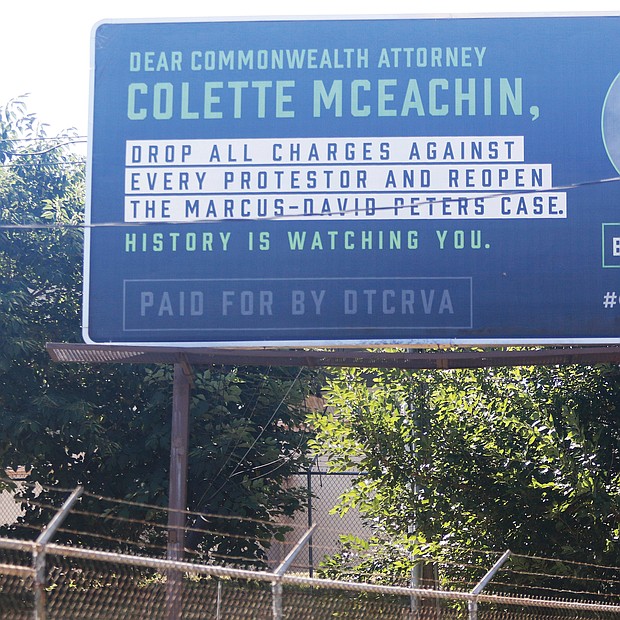 This new billboard on Oliver Hill Way near the Richmond Justice Center spells out key demands protesters in the city have been pressing for weeks. So far, Richmond Commonwealth’s Attorney Colette W. McEachin, who works several blocks west in the John Marshall Courts Building, has resisted the pressure to drop the criminal charges against the more than 300 demonstrators who have been arrested since late May. Mrs. McEachin has promised only that her office would review each case and that those arrested between May 30 and June 1 solely for violating a city curfew order would not face jail time. According to the Virginia Chapter of the American Civil Liberties Union, an undetermined number of people arrested during demonstrations are being held in jail without bond and might not have their preliminary hearings for another month or two. The billboard is the work of a coalition called DTCRVA, which stands for Drop the Charges RVA. 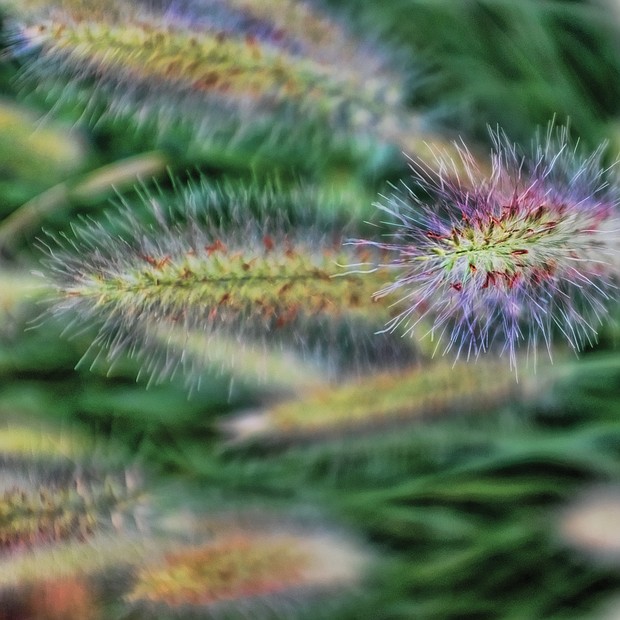 Ornamental grass in the East End 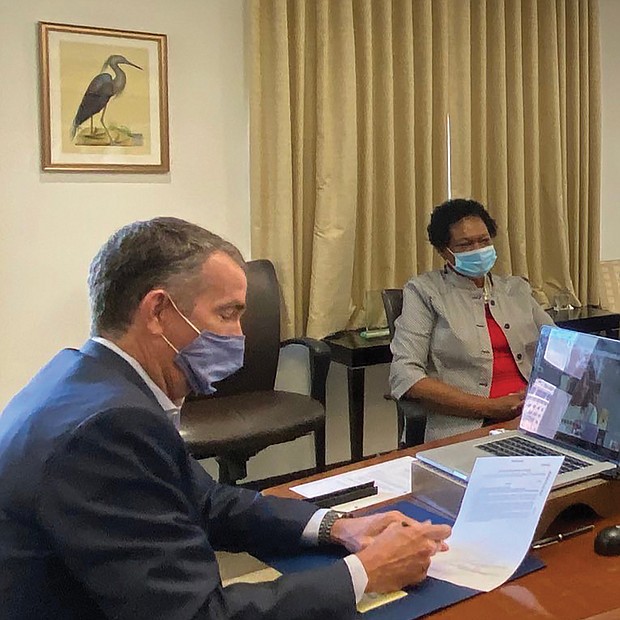 Gov. Ralph S. Northam holds a ceremonial signing into law event for Virginia’s new CROWN Act, legislation that bans discrimination in the workplace and at schools based on a person’s choice of hairstyle, including locs, braids, Afros or curls. The law, which went into effect July 1, was sponsored by Delegate Delores L. McQuinn of Richmond, who was present during the ceremonial signing on July 23 in the governor’s office, and Sen. Lionell Spruill Sr. of Chesapeake, who participated virtually. Virginia is the fourth state in the nation — and the first in the South — to pass the Crown Act. Crown stands for Create a Respectful and Open World for Natural Hair.