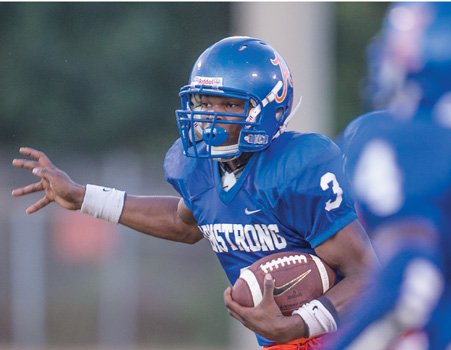 Armstrong quarterback De’Shaun Waller eyes an opening in the game against Varina. Photo by James Haskins

The metamorphosis is complete. Armstrong High School football has gone from powder puff to powerhouse.

“We turned it into our homecoming,” Armstrong coach Kedrick Moody said in a friendly manner. “We got crowned ‘homecoming kings.’”

Varina had won its previous 28 meetings, mostly by lopsided margins.

Averaging 45.6 points per game, Moody’s explosive Wildcats will entertain Highland Springs High School 7 p.m. Friday. It will be a collision of the 5-0 juggernauts.

“The atmosphere will be awesome, electric,” said Moody. “It’s the game of the week in the area. The place will be packed.”

The evening’s festivities will begin with the “Wildcat Walk.” Armstrong players, cheerleaders and the band will parade through the surrounding neighborhood, building excitement.

History could be made. The Wildcats have never defeated the Springers — at least as far back as Armstrong records have been kept.

It also will be the first time Armstrong has been featured on Richmond’s 910 Sports Radio.

The battle of the unbeatens is arguably the biggest game the Wildcats have prepared for since the legendary Armstrong-Maggie Walker Classic played from 1939 through 1979.

Since the start of the Virginia High School League playoffs in 1967, Armstrong never reached a postseason game until year ago, when it squeaked into the Region 3A East playoffs with a 3-8 record.

This season, there should be no “squeaking” in.

The Wildcats are in line for a high seed and first-round home game.

“De’Shaun played like a man among boys,” said Moody. “He’s one of many who willed us to victory.”

Larry Anderson and Kyle Jacobs have been stalwarts defensively.

Moody, who serves as a counselor in the Hopewell school system, arrived at Armstrong three seasons ago after stints as an assistant coach at New Kent and Petersburg and with the Virginia Vipers semi-pro squad.

How things have changed!

Then came the all-time head turner — the upset of Varina, a perennial region/state contender.

“We’ll just continue to do what we do,” said Moody. “We’re not going to get beat by someone’s reputation anymore. We don’t look at the name on their jersey. We just look at them as another group of players that we will attempt to exploit.”

Realizing how quickly his Wildcats have climbed the pecking order, Moody does concede this: