‘I don’t think God wants us to stop’ at removing the Confederate flag, President Obama tells mourners at Rev. Pinckney’s funeral in S.C. 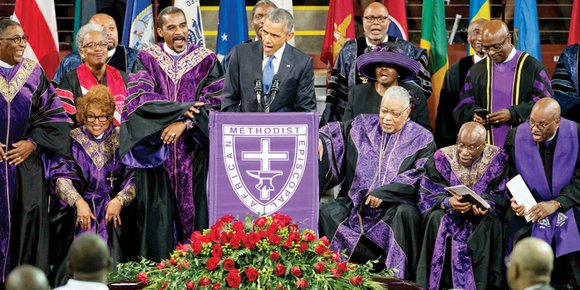 For a moment, President Obama stood alone on the stage.

With an audience of about 5,500 people looking on at the College of Charleston TD Arena, the president then passionately burst into song.

“Amazing Grace, how sweet the sound,” he began, singing the 18th-century hymn solo.

The ministers beside him smiled, stood up and joined in.

Then a church organ was played and the crowd added their voices as they held hands.

The stirring scene took place June 26 at the funeral of the Rev. Clementa Pinckney, the pastor who was slain along with eight church members at Emanuel African Methodist Episcopal Church in Charleston, S.C., during a June 17 Bible study by a white gunman. Dylann Roof, 21, a white supremacist, was arrested the next day and is now behind bars awaiting trial.

After the hymn, President Obama called out the names of the Charleston shooting victims into the microphone. The crowd responded, “Yes!” to every name.

In a speech likely to be considered one of the most memorable of his presidency, President Obama paid an emotional tribute to the pastor and his flock.

“Blinded by hatred, the alleged killer would not see the grace surrounding Reverend Pinckney and that Bible study group,” President Obama told the audience.

Speaking in the language and cadence of the black church, President Obama argued that the massacre and God’s grace “allowed us to see where we’ve been blind” and has given America a chance to face up to the scourges of racism and gun violence.

Bree Newsome boldly holds the Confederate flag after climbing the flagpole at the Statehouse in Columbia, S.C., to take it down last Saturday.

He said the removal of Confederate flags across the South was “a modest but meaningful balm for so many unhealed wounds,” but that the United States needs to go further.

“I don’t think God wants us to stop there,” the president said.

He urged the audience to use the killings as a spur for reforming a criminal justice system that jails one of three black men at some point in their lives and for confronting “the unique mayhem that gun violence inflicts upon this nation.”

“It would be a betrayal of everything Reverend Pinckney stood for, I believe, if we allow ourselves to slip into a comfortable silence again,” President Obama said.

The shootings sparked an intense dialogue over the legacy of slavery and its symbols after photos showing the alleged gunman posing with the Confederate flag surfaced on a website that also displayed a racist manifesto.

Politicians and businesses quickly scrambled to distance themselves from the Civil War-era battle flag of the Confederacy amid calls for the flag to be lowered from the grounds of South Carolina’s State House.

President Obama called the flag “a reminder of systemic oppression and racial subjugation.”

Republican Gov. Nikki Haley, who added her voice to those calls last week, brought a Charleston congregation to its feet Tuesday at the last funeral for one of the victims when she declared: “That Confederate flag will come down.”

Gov. Haley broke down a day earlier in a service to honor church member Myra Thompson, 59, who earned her minister’s degree on the day she was killed.