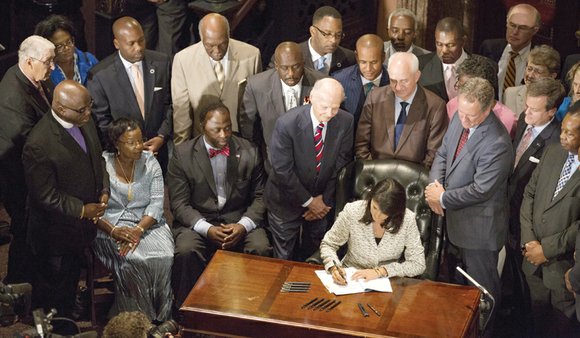 South Carolina Gov. Nikki Haley signs legislation July 9 permanently removing the Confederate flag from the State Capitol grounds in Columbia. She used nine pens that later were given to the families of the nine people killed by a white supremacist at Emanuel African Methodist Episcopal Church in Charleston. Photo by Reuters Jason Miczek 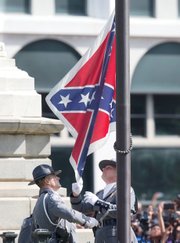 A South Carolina Highway Patrol honor guard removes the Confederate flag from the Columbia statehouse grounds during a ceremony witnessed by thousands.

A growing number of Virginians are enlisting in a grassroots movement spreading across the nation to remove from the public square the vestiges of the traitors who fought against the nation during the Civil War to preserve slavery.

Less than a week after South Carolina Gov. Nikki Haley, a bipartisan group of lawmakers and thousands of people of all ethnicities assembled July 10 to cheer the removal of the Confederate flag from the Statehouse grounds in Columbia, many Virginians are signaling they are fed up as well with Confederate symbols of hate and are saying “enough is enough.”

Illustrating the point, Richmond Mayor Dwight C. Jones ordered a huge American flag to be flown in front of City Hall on Wednesday, only a few blocks from where the Sons of Confederates Veterans group was celebrating its national convention with an event at the Museum of the Confederacy.

The national cry to get rid of Confederate symbols at taxpayer-supported venues kicked into high gear after the heinous murders of nine African-American worshippers inside a Charleston church by a white supremacist last month.

In Virginia, so far, most of those efforts to remove white supremacist symbols have been concentrated in Northern Virginia.

Democratic state Sen. Adam Ebbin of Alexandria told the Free Press on Wednesday he is considering introducing a bill during the 2016 General Assembly session to rename Jefferson Davis Highway.

Portions of U.S. 1 — including about a six-mile stretch in Richmond that extends just south of Downtown into Chesterfield County — are named for the former president of the Confederate States of America, whose capital was Richmond.

“A lot of my constituents, including me, would like to see his name removed from that highway,” Sen. Ebbin said. “Jefferson Davis was not from Virginia, and I am not excited that the state memorializes the leader of the treasonous uprising against the Union.”

He said he expects an uphill battle if he takes on the fight to have the highway renamed, especially in the Republican-dominated House of Delegates, “but I would like to see it changed nonetheless.”

“Davis was an unrepentant white supremacist who fervently believed the Southern cause, slavery and segregation were right and just,” Mr. Zim wrote on the petition page.

“It is therefore outrageous that a major Virginia thoroughfare continues to bear the name of a morally depraved, non-Virginian who rejected the very idea of a United States,” he added.

The Arlington County Board also indicated it plans to ask its legislative delegation to sponsor a bill to change the name of the highway, according to The Washington Post.

Naming U.S. 1 for Jefferson Davis was the idea of the United Daughters of the Confederacy. The UDC also owns the statue of a Confederate soldier in Alexandria and the flags that are raised near the statue on Confederate holidays each year. Members of the Alexandria City Council have indicated they want to end that practice.