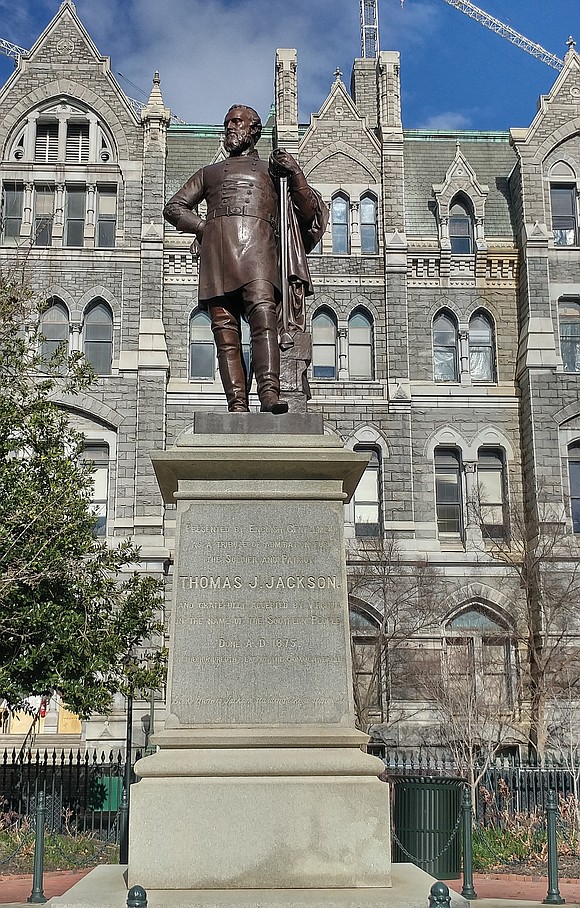 A statue of Confederate Gen. Thomas J. “Stonewall” Jackson stands on the grounds of Capitol Square along a walkway between the Capitol and Old City Hall. George Copeland Jr.

After 88 years, the statue of Confederate traitor Robert E. Lee is gone from the State Capitol.

Gone also are the busts of the eight slavery-defending Confederate leaders and military officers that were positioned with the Lee statue in the Old House Chamber of the Capitol.

In a surprise move, House of Delegates Speaker Eileen Filler-Corn ordered their removal, claiming authority under the state Constitution and House rules to get it done.

The removal drew cheers from the Virginia Legislative Black Caucus and derision from Republican leaders in the General Assembly.

House Clerk Suzette Denslow carried out the order last week, beginning the removal July 23 and completing it on July 24. The Lee statue and busts now are stored in an undisclosed location under House of Delegates control.

“Generations of Virginians, Americans and visitors from around the world have been greeted by these imposing symbols of treason and white supremacy for far too long,” Henrico Delegate Lamont Bagby, chair of the 23-member VLBC, stated in an email issued on behalf of the group.

“If we are going to continue building a more inclusive and just Commonwealth, we must acknowledge and denounce the darker parts of our nation’s history, not celebrate them,” he continued. “A significant step is to ensure that these misguided symbols that honored a lost cause be relegated to space outside the people’s Capitol.”

The removal came five months after the Free Press spotlighted in its Feb. 13-15 edition the General Assembly’s continuing honor of those who sought to destroy the Union with its open display of the items in the Old House Chamber.

The eviction of the racist icons is part of the larger effort to eliminate white supremacist Confederate symbolism from Richmond, the former Confederate capital, the state and much of nation. Their removal is one of the biggest changes the continuing protests over racial injustice and police brutality has produced to date.

In Richmond, huge statues honoring the white supremacist Confederacy that have loomed over the city have mostly been taken down. The state-owned Lee statue on Monument Avenue remains only because it is tangled in a legal fight involving elements who want to protect it.

Richmond Circuit Court Judge W. Reilly Marchant is considering whether to dissolve an injunction barring Gov. Ralph S. Northam from taking down that statue. The parties are still awaiting a written opinion from Judge Marchant, given an appeal is likely to go to the state Supreme Court.

Other places taking action include Hanover County, whose School Board reversed its stance and voted to eliminate the Confederate names on two of its schools along with the signage after years of defending the names.

Also, Gov. Northam last Friday received the green light from a General Assembly-created panel to request the removal of another Lee statue that represents Virginia in the U.S. Capitol. U.S. Reps. A. Donald McEachin of Richmond and Jennifer Wexton of Northern Virginia requested the action and praised the decision.

Speaker Filler-Corn told the Free Press that her decision to remove the Confederate iconography from the state Capitol Building grew out of the public outcry over the May 25 police killing of George Floyd in Minneapolis.

She said before and after becoming speaker, she had discussions about making the change, but she found the protests and demonstrations that have continued since late May created urgency. “No more talk; it was time for action,” she said.

Although Republicans in the General Assembly have criticized the unilateral action, Speaker Filler-Corn said that she made the move after receiving assurances that she had the legal authority to act, given that the Old House Chamber is under the purview of the House of Delegates.

“I am like the CEO (chief executive officer) of the House,” she said.

She called the statue removal highly appropriate and explained her position in a statement she released after the move:

“Virginia has a story to tell that extends far beyond glorifying the Confederacy and its participants. The Confederacy’s primary objective in the Civil War was to preserve an ideology that maintained the slavery of human beings. Now is the time to provide context to our Capitol to truly tell the Commonwealth’s whole history.”

She also named Richmond Delegate Delores L. McQuinn to lead an advisory group to consider further actions regarding House-controlled Confederate artifacts in the Capitol and to make recommendations about the development of additional historical artifacts. The advisory group also is to develop recommendations for what to do with the removed items.

“The artifacts at the Capitol are a painful reminder of the deep-rooted wounds of slavery and 401 years of oppression,” Delegate McQuinn stated. “These Confederate artifacts are constant reminders of individuals who had no intention of guaranteeing justice, equality and equity for all.”

House Republican Leader Todd Gilbert of Shenandoah County called the action “perplexing” if the speaker is serious about telling “the whole history of the Commonwealth.”

He noted that “the Lee statue in the Old House Chamber literally marked the spot where Lee accepted his general’s commission, setting off some of the most historic and tragic events in our nation’s history.

“Unlike the Lee monument on Monument Avenue,” Delegate Gilbert continued, “this statue in the Capitol is a historical marker.”

He also quipped that as the State Capitol served as the Confederate Capitol, it “should no doubt force the speaker’s new advisory group on Capitol artifacts to recommend that it should be razed to the ground.”

Republican leaders in the Senate also decried Speaker Filler-Corn’s action and stated that she apparently was so fearful of scrutiny that she acted “in the dead of night.”

They claimed that she failed to receive public input and usurped the authority of the Capitol Square Preservation Council,” which they called “emblematic of the arrogant and unaccountable stewardship of the General Assembly we have seen merging under the Democratic majority.”

The preservation council, however, focuses on statues on the grounds of the Capitol, not items inside.