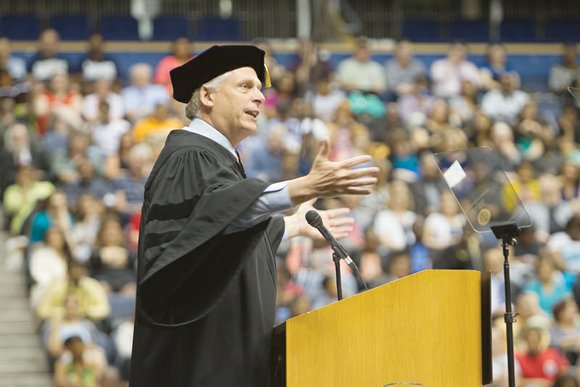 Gov. Terry McAuliffe applauds the innovative and entrepreneurial spirit among Virginia Commonwealth University students. More than half intend to start a business one day, while 15 percent are doing so as students. Photo by James Haskins

Gov. Terry McAuliffe delivered a three-pronged recipe for success to the more than 5,000 graduates at Virginia Commonwealth University’s commencement Saturday at the Richmond Coliseum.

“Think big. Always take chances and never be afraid to fail,” the governor said in his address.

He cited his failed attempt to win the Virginia governorship in 2009 as an example.

He said he refused to give up on his desire to lead the state and ran again — this time successfully in 2013.

“I got out of bed (after the loss) and I hit the road for four years, crisscrossing Virginia. Few people are more qualified to offer advice on failing than I am.”

The governor told the Class of 2015 that VCU is a “great training ground for the real world.”

Gov. McAuliffe added, “More than half of VCU students intend to start a company someday, and 15 percent actually are doing that while still in school.

“That is incredible. I can’t think of another school in America that can say that today,” he said.

He also noted that VCU graduates are “leading the way in innovative new industries while restoring vitality to our existing businesses.”

Members of the Virginia Commonwealth University Class of 2015 celebrate with confetti, noisemakers and cheering during Saturday’s commencement at the Richmond Coliseum.

Gov. McAuliffe said he started his first business at age 14 in Syracuse, N.Y., sealing driveways of people in his neighborhood.

He said he got six jobs on the first day and “I was in business.”

As a student at Georgetown University Law School, he worked on President Jimmy Carter’s re-election campaign. He later became the youngest chairman in the Federal Reserve Bank’s charter association.

He became a millionaire before age 30 and was a prominent fundraiser and national finance chair for President Bill Clinton.

“I was good at asking for money,” Gov. McAuliffe said. “That chance I took, folks, changed my life.

“When opportunity comes along, you take it.” “It might not be easy, but taking a chance is important if you’re going to be successful.”

VCU President Michael Rao told the graduates, “What you discover in our classrooms, laboratories, clinics, studios — and in our community — are not the ends to get you here today, but the beginnings of the ways in which you will someday conquer humanity’s biggest problems and needs.

“You are graduating not just from any university,” he added, “but from one of the world’s premier research universities that’s committed to discovery, creativity and advancing the human experience everywhere.

“And so today,” he continued, “you are more than just a college graduate — you are a leader in your field and in your community. You will be asked to make a difference for those who need you to be your very best.”

The Presidential Medallion, which honors outstanding contributions by members of the VCU community, was awarded posthumously to Dr. Thomas F. Huff, former vice provost for life sciences and research. His widow, May Ligon Huff, accepted the award. Dr. Huff died in February at age 62.