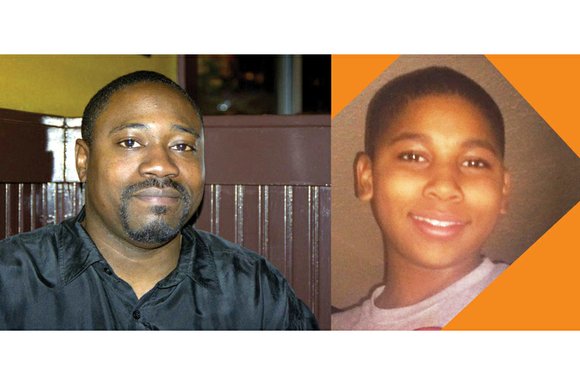 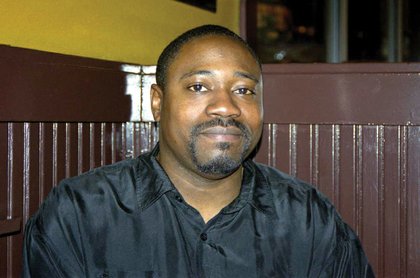 The family of an unarmed African-American shot in the back by a white police officer will get a $6.5 million settlement from the City of North Charleston, S.C.

Walter Scott, 50, was shot after fleeing a traffic stop in April. The shooting was caught on a bystander’s cell phone video and reignited a national outcry over police treatment of African-Americans and people of color.

North Charleston Mayor R. Keith Summey said in a statement Oct. 9 that the City Council had voted to settle all potential claims over Mr. Scott’s death for $6.5 million.

“I am glad the city and the family were able to reach a settlement without the necessity of a lawsuit,” he said.

“It could have been a trillion dollars. It would never bring my son back. But I thank them for what they did,” Mr. Scott’s mother, Judy, said of the settlement.

Chris Stewart, an attorney for the Scott family, said the payout was the largest pre-lawsuit settlement in the history of South Carolina and one of the largest in the United States.

He said it would take care of Mr. Scott’s four children for the rest of their lives.

The settlement comes after New York agreed to pay $5.9 million to the family of Eric Garner, whose death in 2014 after being put in a chokehold by a police officer was captured on a bystander’s video.

The City of Baltimore said in September that it would pay $6.4 million to the family of Freddie Gray, whose death from an injury in the back of a police transport van in April sparked protests and rioting. Six officers are charged in his death. 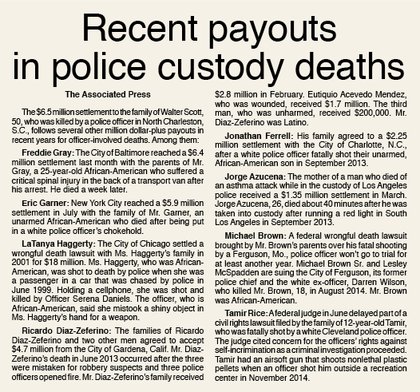 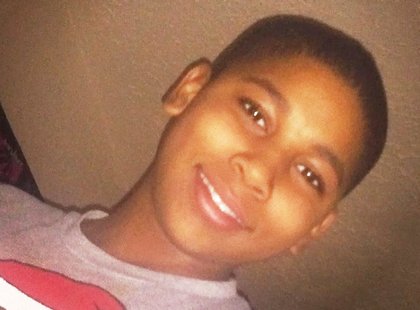 Two outside experts have concluded a Cleveland police officer’s fatal shooting of 12-year-old Tamir Rice, who was wielding a toy gun, was a reasonable response to a perceived threat, according to reports released by an Ohio prosecutor’s office.

The independent conclusions released Oct. 10 and submitted to the Cuyahoga County prosecutor’s office come ahead of an expected decision by a grand jury on whether criminal charges are warranted in the November 2014 shooting of the youngster, which was captured on surveillance video.

Cuyahoga County Prosecutor Timothy McGinty said in a statement his office was not reaching any conclusions based on the reports, but an attorney for Tamir’s family criticized the reports as a “whitewash.”

Tamir was African-American while the police officer who shot him is white. The case is one in a series of high-profile deaths of African-Americans at the hands of law enforcement that have raised questions about use of force by police.

Nearly one year ago, Cleveland police received an emergency call about someone brandishing a gun outside a city recreation center.

Officer Timothy Loehmann shot Tamir twice in the abdomen, seconds after his partner, who also is white, drove their vehicle to within 5 feet of the youngster. Tamir died the next day.

The gun turned out to be an airsoft-type replica pistol that shoots pellets, but had the orange tip removed.

Retired FBI agent Kimberly Crawford, in a review of the shooting, wrote that it was “apparent not only was Officer Loehmann required to make a split-second decision, but also that his response was a reasonable one.”

In another report, Colorado prosecutor S. Lamar Sims also concluded that “Officer Loehmann’s belief that Rice posed a threat of serious physical harm or death was objectively reasonable, as was his response to that perceived threat.”

The reports, which cited federal case law, stood at odds with an opinion from a Cleveland judge who in June found probable cause that Officer Loehmann should face a murder charge. Municipal Court Judge Ronald Adrine’s opinion did not compel charges or require the officer’s arrest.

Mr. McGinty has said the case will go to a grand jury.

“Any presentation to a grand jury — without the prosecutor advocating for Tamir as prosecutors do for crime victims every day — is a charade,” Subodh Chandra, an attorney for the Rice family, said in a statement.