No charges in shootings of Jacob Blake and Tamir Rice 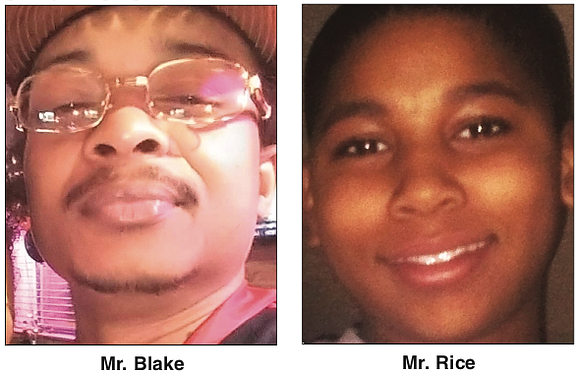 KENOSHA, Wis. - A Wisconsin prosecutor declined Tuesday to file charges against a white police officer who shot a Black man in the back in Kenosha, Wis., concluding he couldn’t disprove the officer’s contention that he acted in self-defense because he feared the man would stab him.

The decision, met with swift criticism from civil rights advocates and some public officials, threatened to reignite protests that rocked the city after the Aug. 23 shooting that left Jacob Blake paralyzed.

Gov. Tony Evers, a Democrat who is white, called the decision “further evidence that our work is not done” and called for people to work together for equity. Lt. Gov. Mandela Barnes, who is Black, was more pointed on Twitter: “I wish I could say that I’m shocked. It’s another instance in a string of misapplications of justice.”

The decision by Kenosha County District Attorney Michael Graveley comes exactly one week after the U.S. Justice Department an- nounced that it would not bring federal criminal charges against two Cleveland police officers in the 2014 killing of 12-year-old Tamir Rice, saying video of the shooting was of too poor a quality for prosecutors to conclusively establish what had happened.

In Kenosha, Mr. Graveley said investigators concluded Mr. Blake was carrying a knife when police responded to a report he was trying to steal a car. Officer Rusten Sheskey said he “feared Jacob Blake was going to stab him with the knife” as he tried to stop Mr. Blake from fleeing the scene.

“I do not believe the state ... would be able to prove that the privilege of self-defense is not available,” Graveley said.

The shooting of Mr. Blake, captured on by- stander video, turned the nation’s spotlight on Wisconsin during a summer marked by protests over police brutality and racism. More than 250 people were arrested during protests in the days that followed, including then-17-year-old Kyle Rittenhouse, a self-styled medic with an assault rifle who is charged in the fatal shootings of two men and the wounding of a third.

Mr. Blake’s family members expressed anger about the charging decision and led a small protest Tuesday night, but emphatically said they do not support any violence in the wake of the decision.

Justin Blake said his nephew is focused on his recovery and is an inspiration to his family. He said Jacob Blake wanted to encourage the community to come together call for justice in his case.

“This is going to impact this city and this state and this nation for many years to come,” Justin Blake said, “unless the people rise up and do what they’re supposed to do. This is a govern- ment for the people by the people, correct? We talk about this Constitution everybody’s supposed to be so committed to, and yet we stand in the state that has the most convictions of African-Americans in the United States. So they’re weighing heavy on one side of justice, but they’re allowing police officers to rain down terror on our communities. It’s injust.”

Ben Crump, an attorney for Mr. Blake’s family, said in a statement the decision “further destroys trust in our justice system” and said he would proceed with a lawsuit. In a later tweet, Mr. Crump questioned whether Mr. Blake threatened Officer Sheskey with a knife, saying “nowhere does the video footage show a knife extended and aimed to establish the requisite intent.”

A federal civil rights investigation into Blake’s shooting is still underway. Matthew Krueger, the U.S. attorney for Wisconsin’s Eastern District, said the Department of Justice will make its own charging decision.

The Blake shooting happened three months after George Floyd died while being held down by police in Minneapolis, a death that was captured on bystander video and sparked out- rage and protests that spread across the United States and beyond. The galvanized Black Lives Matter movement put a spotlight on inequitable policing and became a fault line in politics, with President Trump criticizing protesters and aggressively pressing a law-and-order message that he sought to capitalize on in Wisconsin and other swing states.

Mr. Graveley told reporters during a two-hour presentation Tuesday afternoon that investigators determined that the events leading up to the shooting began when the mother of Mr. Blake’s children called police and said he was about to drive off in her car. Officers determined en route that Mr. Blake had an outstanding felony warrant for sexual assault.

They ar- rived to find Mr. Blake placing the couple’s three children in the back seat of the woman’s SUV. Mr. Graveley said officers had no choice but to arrest him since he was wanted. He said Mr. Blake resisted, fighting with the officers as they tried to handcuff him. Officers used a stun gun on him three times to no effect.

Noble Wray, a former police chief and a use-of-force expert who reviewed the investigation, said Mr. Blake had a knife that apparently fell to the ground during the struggle. Mr. Blake picked it up and officers disengaged and drew their guns. Mr. Blake then tried to get into the SUV, Mr. Wray said.

Officer Sheskey grabbed the back of Mr. Blake’s shirt, Mr. Graveley said. Mr. Blake turned and moved the knife toward Officer Sheskey, the officer told investigators, leading him to believe his life was in danger, the district attorney said.

Officer Sheskey fired seven times, hitting Mr. Blake in the back four times and in the side three times, leaving him paralyzed from the waist down.

The officers were not equipped with body cameras.

Officer Sheskey, 31, has been the subject of five internal investigations since he joined the Kenosha department in 2013, including three reprimands for crashing his squad car three times over three years. He has also earned 16 awards, letters or formal commendations, his personnel file shows.

Federal authorities closed the investigation in Tamir Rice’s case in Cleveland on Dec. 29. Their decision not to bring federal criminal charges, revealed in a lengthy statement, does not condone the officers’ actions but rather says the cumulative evidence was not enough to support a federal criminal civil rights prosecution.

Tamir was playing with a pellet gun outside a recreation center in Cleveland on Nov. 22, 2014, when he was shot and killed by Officer Timothy Loehmann, who is white, seconds after Officer Loehmann and his partner, Officer Frank Garmback, arrived at the scene. The officers were called to the recreation center after a man drinking beer and waiting for a bus had called 911 to report that a “guy” was pointing a gun at people. The caller told a 911 dispatcher that it was probably a juvenile and the gun might be “fake,” though that information was never relayed to the officers.

To bring federal civil rights charges in cases like these, the Justice Department must prove that an officer’s actions willfully broke the law and are not simply the result of a mistake, negligence or bad judgment. It has been a consistently tough burden for federal prosecutors to meet across both Democratic and Republican administrations, with the Justice Department declining criminal charges against police officers in other high-profile cases in recent years, including in the deaths of Eric Garner in New York City and Michael Brown in Ferguson, Mo.

In a statement, Subodh Chandra, an attorney for the boy’s family, said the Justice Depart- ment’s “process was tainted” and the family has demanded prosecutors provide additional information about recommendations made dur- ing the probe.

“It’s beyond comprehension that the de- partment couldn’t recognize that an officer who claims he shouted commands when the patrol car’s window was closed and it was a winter day is lying,” Mr. Chandra said. “The Rice family has been cheated of a fair process yet again.”