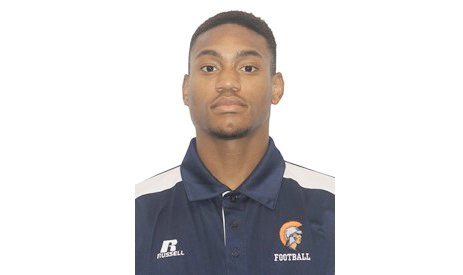 The most appreciated gifts are often those you never saw coming.

A sophomore transfer from Shepherd University in West Virginia, Cannon didn’t create so much as a ripple in the Trojans’ preseason prospective.

He has become the gridiron equivalent of a shock wave ever since.

“I knew absolutely nothing about Trent until spring ball,” said Coach Byron Thweatt, who became the Trojans football coach in January.

“He came out for the team — really just to try out — but he showed flashes of brilliance.”

The 6-foot, 195-pound running back ran for 141 yards in VSU’s 24-23 victory over Elizabeth City State University on Oct. 10. He’s also a top reason VSU heads into its homecoming game with a legitimate chance for a third straight CIAA Northern Division pennant.

Out of nowhere, Cannon has emerged as perhaps one of VSU’s biggest factors as it prepares to take on Bowie State University at 2 p.m. Saturday at Rogers Stadium.

The matchup figures to be a pivotal Northern Division clash despite the absence of Bowie State’s star quarterback, Matt Goggans, who was ruled ineligible.

Goggans, aka “Matty Ice,” was leading the CIAA in virtually every passing category through five games.

While the CIAA has not yet changed its official standings, it is likely Bowie State will forfeit four victories, including two non-Divisional CIAA wins.

VSU, Bowie State and Virginia Union universities are all 1-0 in the Division. VSU has one non-Divisional CIAA loss to Fayetteville State University. The Trojans are 4-2 overall, 2-1 in the CIAA and 1-0 in the Northern Division.

The Trojans won the CIAA Northern Division in 2013 and 2014 and claimed the CIAA championship a year ago in Coach Latrell Scott’s final season in Ettrick.

Despite limited action in VSU’s opening loss to California University of Pennsylvania, Cannon has 690 yards and six touchdowns on 128 carries in five full games.

“Trent is a slasher,” Coach Thweatt says of Cannon’s running style. “He’s strong, very strong, between tackles. But he also has the speed to get to the edge.”

Bellamy bulled his way to 989 yards a year ago, but has been slowed by an ankle injury this fall.

Still, Bellamy scored a touchdown at Elizabeth City and has 300 yards for the season.

VSU hasn’t lost to a Northern Division team since the 2012 finale at Virginia Union University.