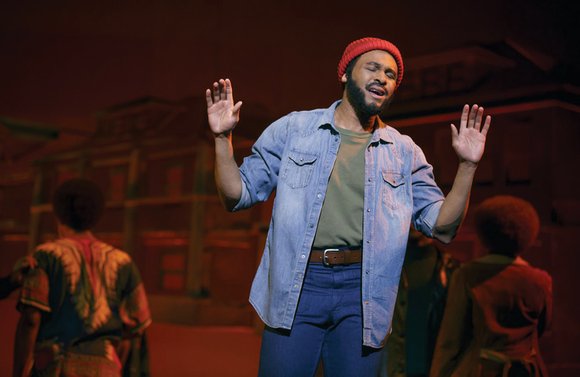 Motown’s music, magic and legends had the world dancing in the streets in the 1960s and 1970s.

Audience members will want to dance again when “Motown: The Musical” comes to Richmond Tuesday, Jan. 5, through Sunday, Jan. 10, at the Altria Theater.

The jukebox musical is based on the autobiography of Motown’s founder, Berry Gordy Jr. The book, “To Be Loved: The Music, the Magic, the Memories of Motown,” not only details the creation and operation of the Detroit-based record label, but more importantly, the lifelong friendships Mr. Gordy developed with legends such as Mr. Robinson, Marvin Gaye and Ms. Ross. For this reason, the musical is a project that holds special meaning for Mr. Gordy.

“This is his baby and he’s very hands on,” explains Jarran Muse, who portrays Mr. Gaye in the production.

The Plainfield, N.J., native is too young to have seen the late Mr. Gaye perform, but he identifies with the “What’s Going On” singer’s style and passion.

Actor and singer Elijah Ahmad Lewis, center, is flanked by Berry Gordy Jr., left, and legend Stevie Wonder as he and fellow cast members of “Motown: The Musical” celebrate the show’s national tour in late 2014 in Detroit, the home of Motown. Mr. Lewis portrays Mr. Wonder in the show that opens Jan. 5 in Richmond at the Altria Theater.

“Growing up, he was a great artist for me to connect with,” explains Mr. Muse. “He was political and cared about the music.”

With limited interviews and live performances on YouTube to draw from, Mr. Muse said he relied heavily on the personal accounts and insights provided by Mr. Gordy to accurately portray the soulful crooner.

“He [Mr. Gordy] was my primary resource, not only because of the professional connection they had but the fact that Marvin was married to his sister.”

Possibly more difficult than portraying a musical legend you’ve never seen is to take on the role of a Motown legend who is still selling out arenas. Such is the challenge for Elijah Ahmad Lewis, who is cast in the role of Stevie Wonder.

“I get nervous before I go on,” admits Mr. Lewis, who auditioned five years ago for the Broadway production and was called back for the national tour.

Mr. Lewis said that he is keenly aware of the audience’s expectations for him to get it right, and he uses that to fuel his performance.

“Stevie is an icon. I love him and grew up on his music. So there is no greater homage than to portray him,” adds the native of Harlem.

Mr. Lewis also worked with the Motown founder one on one to understand Mr. Wonder’s musical and personal evolution.

The story of Motown’s beginnings have been touched on before in films including “The Temptations” and “The Jacksons: An American Dream.” However “Motown: The Musical” differs in that it concentrates more on each artist’s personal interactions — specifically the love affair between Mr. Gordy and Ms. Ross.

While Mr. Muse and Mr. Lewis agree fans will enjoy the show’s interesting behind-the-scenes history about Motown, it is still the musical performances that have audiences going crazy.

More than 50 songs from the Motown catalog are included in the production, including hits by The Supremes, Martha and the Vandellas, Mr. Robinson, the Jackson 5 and a battle between The Temptations and The Four Tops.

Mr. Lewis says that he is inspired by the response he has received from younger audience members and is proud to help the younger generation see where their music originates.

“Motown created music that makes you feel good. But, more importantly, it’s our music and our history.”