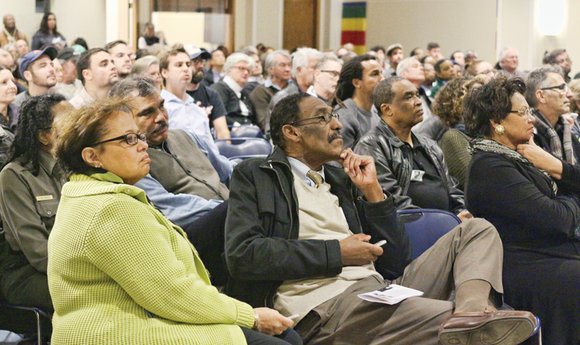 Johnny Mickens III, great-grandson of Maggie L. Walker, center, is among more than 230 people who turned out Tuesday evening for the hearing on city plans for honoring Mrs. Walker. Beside him is his ex-wife, Faithe Norrell, a member of the Public Arts Commission’s Site Selection Committee. Location: Auditorium in the Main Library in Downtown. Photo by Sandra Sellars

Too small and too congested with traffic.

That reality is starting to clash with the vision of creating a $600,000 to $800,000 plaza and statue celebrating Maggie L. Walker at the intersection of Broad and Adams streets and Brook Road in Downtown.

The problems with the site — including the live oak tree that now dominates the triangular space where the plaza and statue are to go — were fully evident during a community session Tuesday at the Richmond Public Library’s Main Branch that drew more than 230 people.

The goal of the session: To collect the views of the public to help inform the design of the statue and plaza.

Many came to the same conclusion as City Councilwoman Ellen F. Robertson, who said after the session that the Walker plaza “would be a tight fit. I think there is no question about that.”

She previously had joined her colleagues in voting for the site, but was left wondering whether the space needs to be expanded to create the kind of memorial to Mrs. Walker that is envisioned.

As outlined by city Planning Director Mark Olinger and others involved, including the statue’s artist Antonio Tobias “Toby” Mendez, the plaza is to be a welcoming site that will draw people to learn about the inspirational woman who championed black rights and promoted black business by creating a bank, department store and newspaper in challenging white supremacy. 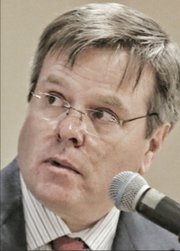 Along with a statue, the site will have carvings with quotes from Mrs. Walker and quotes about her, as well other information, and possibly interactive technology, Mr. Mendez said.

The creator of at least 30 other major public art installations, Mr. Mendez assured the audience that he could create a space that could host small and large events and also provide room for people to pause and meditate on Mrs. Walker’s legacy — tree or no tree. When it comes to the tree, “that’s up to you guys,” he said. “I just need to know what my canvass will look like.”

However, the Walker site looks like a broom closet compared with the grand plaza Mr. Mendez created to honor the late U.S. Supreme Court Justice and civil rights great Thurgood Marshall that stands in front of the Maryland Statehouse in Annapolis.

Mr. Mendez made many in the room envious when he put on a slide showing the huge space occupied by the Thurgood Marshall memorial, sharply contrasting with the cramped site that the council, the mayor and the city’s Public Arts Commission have designated for the Maggie Walker statue.

As Richmond resident Jennie Dotts noted, the chosen Walker site will be jammed against two restaurants in an area where there will be virtually no parking. The current curb spaces on Broad Street also are to be eliminated and the traffic lanes narrowed from three to two lanes to accommodate the Pulse, the new Bus Rapid Transit, and a station in the median.

“We should be looking at Abner Clay Park,” Ms. Dotts said, which would offer the kind of large space for a suitable plaza that actually would be inviting.

Others who spoke noted the view of the statue would be obscured by the BRT buses traveling by. And Mr. Mendez said the site itself has limitations because of underground utilities that he said he has to avoid. And that doesn’t count the poles for traffic lights that will not be relocated and a new sidewalk that will need to be built on the Adams Street side of the plaza.

The tree, itself, also raised concern because of its implications as a symbol of lynching, an issue civil rights advocate Gary Flowers raised in the Free Press, but also for the way it would distract and obscure the view of the Walker statue.

Given the tight site, Councilwoman Robertson said she could not see how the tree could stay and allow for a clear view of the statue that the artist said would be 8 to 12 feet tall.

Others also expressed concern that the tree could fill up half the site and would diminish the statue. That included Johnny Mickens III, a great-grandson of Mrs. Walker, who urged on behalf of six other great-grandchildren that the tree be removed to ensure his great-grandmother is the dominant focus.

“Does anyone know of another Richmond statue that is shaded by a tree?” another city resident, Michael G. Brown, asked the audience. “How about the statue of A.P. Hill? Or “Stonewall” Jackson? Or the Statue of Liberty? Or the cross that marks the arrival of English explorers? Enough said.”

Chantel Taylor also pleaded for the removal of the tree so it would not hover above “one of our sheroes.” She said even if some in the audience could not understand, the tree would be offensive to many who would see it as a symbol of the hangings that took so many black lives in the past.

When the audience was polled on a scale of 1 to 10, 43 percent of the audience pushed 1 on their wireless electronic counters to agree that the tree “detracts from the space,” with smaller percentages hitting 2, 3 and 4 to indicate the tree did not belong.

At least 39 percent showed support for the tree by pressing 10, with one audience member saying removing the tree would be like taking “a life.”

Mr. Flowers stepped forward to speak after Mr. Mendez suggested that Mrs. Walker should be considered as “a bridge” between the then-divided black and white communities, saying that’s how he would like to portray her.

In passionate tones, Mr. Flowers disputed that view. He said Mrs. Walker “was a race woman” who fought back against the white supremacists and Jim Crow through her efforts to start businesses and also to speak up for “freedom and equality” for black people.

He expressed dismay that Mr. Mendez would even consider creating a softer view of Mrs. Walker, rather than showing her as the proud, strong, vibrant leader who sought to uplift the black community and was engaged in the fight for equal rights, including joining the 1904 boycott of segregated streetcars.

This was the first and only public session that is to be held to gather public opinion, but the Public Arts Commission is hoping those who could not attend would submit their views to City Hall.