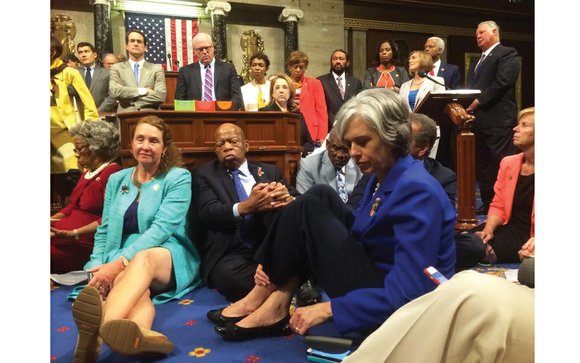 Rep. Katherine Clark of Massachusetts tweeted a photo from the floor of the U.S. House of Representatives on Wednesday showing the sit-in demanding common sense gun control legislation to keep suspected terrorists from buying guns and tightening background checks. Sitting on the floor in the center is Rep. John Lewis of Georgia, who led the historic action. Photo by Reuters

Democratic lawmakers, using 1960s tactics to press their point, staged an surprise sit-in on the floor of the U.S. House of Representatives on Wednesday, demanding the chamber remain in session until the Republican leadership agrees to a vote on gun control legislation.

Nearly 200 legislators, including several members of the Senate, joined in the protest led by Democratic Rep. John Lewis of Georgia, a veteran of the Civil Rights Movement and one of the original Freedom Riders who led the Student Nonviolent Coordinating Committee, student sit-ins and voter registration drives throughout the South that paved the way for the historic Selma to Montgomery march in Alabama in 1965.

Chanting “No bill, no break!” the lawmakers disrupted the House session and occupied the floor of the chamber. Photos of the action were sent via Instagram, Twitter and other social media alerting the public, even after the House cameras that broadcast the sessions were turned off.

“We have been too quiet for too long,” Rep. Lewis told his colleagues. “We will be silent no more.”

Democrats urged passage of gun control measures, such as tighter background checks and legislation to curb the sale of weapons to people on government watch lists.

House Democratic leader Nancy Pelosi told reporters members intend to continue their sit-in as long as it takes to get a vote on a bill.

The move echoed last week’s filibuster by Senate Democrats to protest inaction on guns in the wake of the June 12 massacre at a gay nightclub in Orlando, Fla., where a gunman killed 49 people and wounded 53 in the deadliest mass shooting in modern U.S. history.

“Our message is clear,” Rep. Scott said through a spokesman. “It’s not going to be business as usual. We’re committed to continue this effort until the people’s House does its job.”

Members of the Congressional Black Caucus stood in unity with Rep. Lewis, calling the action historic.

“Congress can no longer simply hold moments of silence for the victims of gun violence,” said Rep. G.K. Butterfield of North Carolina, chairman of the CBC. “We must act, and we will not leave the House floor or Washington without taking action to prevent the next tragedy.”

While many people called the House sit-in unprecedented, a similar action happened in August 2008, when House Republicans, then in the minority, took the floor to demand a vote on allowing offshore drilling.

House Republicans have declined to advance gun control legislation. Speaker Ryan said earlier Wednesday he was “waiting to see what the Senate does” before discussing the topic.

On Tuesday, Sens. Kaine and Mark R. Warner of Virginia pledged to continue fighting to keep guns out of the hands of suspected terrorists after measures were blocked Monday in largely party-line votes that showed the lingering political power in Congress of gun rights defenders and the National Rifle Association.

The Orlando gunman, Omar Mateen, who was born in the United States to Afghan parents, pledged allegiance to Islamic State during his June 12 rampage before he was fatally shot by police.

Sen. Warner said his office was flooded with phone calls and emails following the tragedy by people making it clear they wanted action taken by Congress.

“We don’t just want to hear thoughts and prayers on behalf of the victims — we want to see action to address gun violence,” Sen. Warner said, quoting the callers.

“In the wake of this attack, members of Congress must be willing to take a fresh look at solutions to make our communities safer while protecting the rights of law-abiding gun owners.”

He said as a member of the Senate Intelligence Committee, he understands the challenges in dealing with the terrorists’ threats. But given those challenges, “it makes absolutely no sense to me that the Senate would refuse to take these common sense steps to strengthen our background check system and close a dangerous loophole that allows suspected terrorists to legally purchase guns,” he said.

“While no single law will end gun violence or completely protect us from terrorism, it is clear that Americans want action.”

Sen. Kaine called it “appalling” that the measures failed, particularly for Virginians, who have seen their share of gun violence in recent years.

“Virginians are far too familiar with the consequences of gun violence,” Sen. Kaine said. “While I was governor, the Commonwealth witnessed what was, until last week, the worst mass shooting in U.S. history,” he said, referencing the shooting deaths of 32 people at Virginia Tech in April 2007.

“During my time in the Senate, we have seen three Virginians shot on live television,” he said referring to the fatal shooting last August of Roanoke television reporter Alison Parker and photojournalist Adam Ward and the wounding of Roanoke chamber of commerce executive Vicki Gardner, during a live morning show broadcast.

“Newtown, Charleston, San Bernardino, Orlando and the countless daily gun deaths that receive less attention show the dire price Americans pay for congressional inaction.” Sen. Kaine continued. “I hope that my colleagues will reconsider and act on this issue before another tragedy strikes.”

Accusing the U.S. Senate for its “shameful display of cowardice,” President Obama expressed disgust for the vote. “Gun violence requires more than moments of silence,” the president said on Twitter. “It requires action. In failing that test, the Senate failed the American people.”

The four defeated measures were a bitter setback to advocates who have failed to get even modest gun curbs through Congress despite repeated mass shootings.

Sen. Kaine is among a bipartisan group of eight senators still hoping to forge a compromise for later in the week aimed at keeping firearms away from people on terrorism watch lists. That effort, however, faces an uphill battle, with critics in both parties skeptical about its chances.

As the political parties remain largely locked in their positions, polls show Americans are increasingly in favor of more restrictions on guns in a country with more than 310 million weapons, about one for every citizen.