Siblings win ‘Teacher of the Year’ 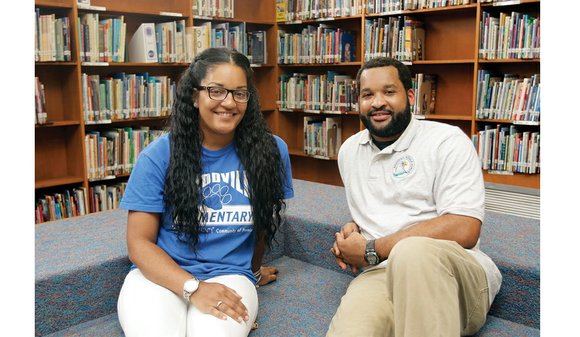 Ridgely Carter-Minter and her brother, Gilbert Carter Jr., were named Teacher of the Year at their respective schools in Richmond. Mrs. Carter-Minter teaches fifth grade at Woodville elementary School, and Mr. Carter is a special education teacher at Boushall Middle School. Photo by Sandra Sellars

Yet, their recent recognition as Teacher of the Year at their respective schools is singularly rooted in a Richmond family legacy known for teaching excellence.

Mr. Carter, 34, was named Teacher of the Year at Boushall Middle School in South Side, where he teaches eighth grade special education.

Shortly after learning about her brother’s honor in May, Mrs. Carter-Minter, 31, also was named Teacher of the Year — at Woodville Elementary School in the East End, where she teaches fifth grade.

Each school in Richmond selects an outstanding teacher to compete for Richmond Public Schools’ “Teacher of the Year.” Those teachers, selected by peer review within their school, are chosen on the basis of contributions they make to students, the school division and the community. An awards ceremony selecting Richmond’s overall Teacher of the Year will take place later this year.

Mr. Carter and Mrs. Carter-Minter are products not only of Richmond Public Schools, they come from a large, extended family whose members are replete with their own recognition as classroom teachers and school administrators.

Other family members serve as an English specialist and in the performing arts for Richmond Public Schools.

Mr. Carter said both his father and uncle would be proud of his and his sister’s accomplishments. Their father died in October 2015, nine months after the death of their uncle. For both men, education was a high priority and they encouraged their children to enjoy the process and rewards it can offer, Mr. Carter said.

Mr. Carter said their influence “without a doubt” fueled his zest for teaching, even though he did not immediately follow that path.

Growing up, Mr. Carter dreamed of an engineering career, which led him to Virginia Tech, where he graduated in 2006 with a bachelor’s degree in interdisciplinary studies and an engineering minor.

After graduation, he worked for three years as an industrial engineer for UPS. Looking to switch careers, he hadn’t thought much about teaching, although family members often told him to give it a try.

“I kept denying it, denying it and denying it,” he said. An eventual visit to his sister’s classroom as a volunteer reader led to him “falling in love with teaching,” he said.

He later became a substitute teacher before enrolling in and completing Virginia Union University’s Teacher Licensure Program. He joined Boushall Middle School seven years ago, and considers his career switch “one of the best decisions I ever made.”

Mrs. Carter-Minter decided that teaching would be her calling before she graduated from Thomas Jefferson High School in 2002. Inspired by her family and many of her teachers whom she admired, Mrs. Carter-Minter mentored and tutored fellow students at a local library and during summer school while she was a teenager.

After enrolling at Old Dominion University, where she earned a bachelor’s degree in elementary education, she continued to work each summer as a peer tutor for Richmond schools and worked as a substitute teacher on days she did not have classes during the academic year.

Over time, Mrs. Carter-Minter developed an affinity for working with lower-achieving students from the inner-city. She believes that her ability to relate to such students has led to the “small, personal gains” that she sees them develop by the time they leave her classroom.

Woodville Elementary serves children from Creighton Court, Whitcomb Court, Mosby Court and Fairfield Court public housing communities. As a result, many of the students experience situations at home that lead them to lash out at others or to display inappropriate behavior, she said.

“It’s important to listen to them and let them explain what’s going on and to talk to their parents,” said Mrs. Carter-Minter. “Once you do so, then you begin to understand their actions.”

Mr. Carter, who teaches algebra to students ages 13 to 15, agrees.

“There is satisfaction and joy in seeing them grow from September until now,” he said. “I enjoy building relationships with them and giving them what they need individually because they are not all the same.”