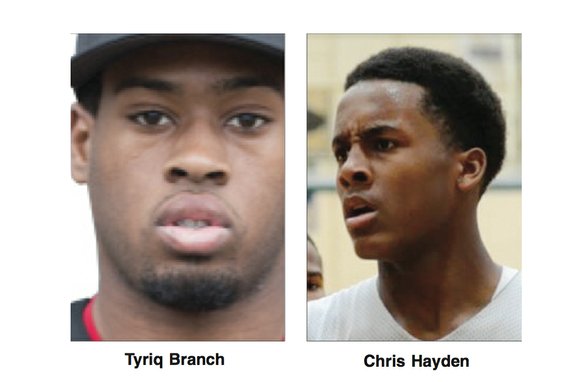 Tyriq Branch of Henrico High School and Chris Hayden at L.C. Bird High School in Chesterfield County have been selected to participate in the Breakthrough Series, June 15 through 19 in Cincinnati.

The annual event is sponsored by Major League Baseball and USA Baseball, with the intent of discovering and developing prospects among players of color.

Branch and Hayden’s all-expenses-paid trip will provide instruction and evaluation that could possibly lead to college and/or pro looks.

Forrester recommended the Richmond area teens for the camp.

“There will be a lot of college scouts in attendance, and pro scouts, too,” Forrester added.

Former big league players will provide instruction and the Major League Scouting Bureau will make its evaluations available to colleges and pro teams.

Along with training sessions, the young men also will play in competitive games.

Branch is a 6-foot-3, 190-pound all-round player who takes his turn pitching and playing first and third base for Henrico High School under Coach Bryan Uzzell.

“I’ve helped coach Tyriq since he was about 10 years old,” said Uzzell. “He has always been the biggest kid on the field, always had the best arm and is one of the best hitters, too.”

Branch used that lively right arm to strike out 15 batters in a game earlier this spring against Highland Springs High School in Henrico County. The Warriors senior has played in the MJBL and also with the Henrico Hitters travel team, coached by Uzzell.

Uzzell, himself a product of the MJBL, played for Armstrong High School and Virginia State University.

Hayden is a unique athlete — both big and surprisingly fast.

“Chris is about 6-foot, 260 pounds and even at this size is still among the fastest kids on our team,” said Bird High School Coach Kris Wheeler.

“He pitches and plays outfield for us. But on the next level, I’m guessing he’ll be an infielder.”

Neither Branch nor Hayden has received a college scholarship offer to play at this point. The Cincinnati exposure could help.

The pair also will be playing for Forrester’s Richmond-based team in the MJBL Inner-City World Series July 18 through 23 in Chicago.

Concerned that African-Americans comprise only about 10 percent of big-league baseball talent, MLB also sponsors Reviving Baseball in Inner Cities (RBI, a program aimed at developing talent in communities of color).

Jackie Bradley, an outfielder for the Boston Red Sox, owes some of his early mentoring to MJBL. Bradley lived in Richmond and played for MJBL before moving to Northern Virginia. He later became the College World Series MVP for the University of South Carolina.

Among the last athletes from Richmond schools to reach the top level was outfielder Alex Cole, a George Wythe High School alumnus who played in the big leagues from 1990 to 1996.