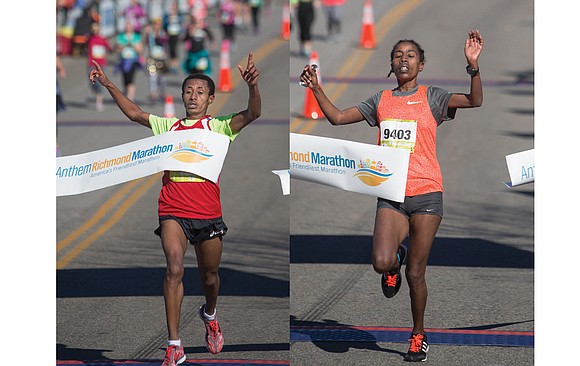 Dadi Beyene, 28, of Ethiopia clinched the men’s first-place finish, running 26.2 miles in 2 hours,19 minutes and 36 seconds. // Bizuwork Getahun, 27, of Ethiopia snaps through the finish line to become the women’s winner of the 2016 Richmond Marathon. Her time, 2 hours, 37 minutes and 51 seconds, was the fastest women’s winning time since 2002. Photo by James Haskins

The 39th edition of the Richmond Marathon, like many of the races before it, was dominated by runners from East Africa.

More than 17,000 mostly local and state runners and enthusiasts lined up Saturday in Downtown for the three races — the 26.2-mile marathon, the 13.1-mile half-marathon and an 8K race.

Beyene, 28, and Getahun, 27, each received $2,500 from the organizing group, Sports Backers, for their first place finishes.

Kenyan runners clinched second through fifth places this year. Sixth-place Greg Mariano of Arlington was the first American to place in 2:27:44.

Taking second for the women runners was Susanna Sullivan of Reston in 2:42:34.

The American Family Fitness Half Marathon also was won by an Ethiopian, Girma Gebre, successfully defending his 2015 crown. The 23-year-old covered the 13.1-mile course in 1:04:41, with Rachid Ezzounlou of Morocco placing second.

The top two women’s half-marathon runners were Kenyans Joan Aiyabei in 1:12:25 and Veronicah Maini in 1:12:50.

Traditionally, the elite East African runners register for the Richmond event at the last minute. Beyene didn’t enter this year’s marathon until the night before and was assigned No. 1138. Most elite runners are identifiable by single- and double-digit numbers.

Ethiopia, located on the Horn of Africa north of Kenya, is the world’s 27th largest nation with about 99.5 million people. It’s status in global running in significantly higher.

Since 1960, Ethiopians have won 22 gold, 10 silver and 21 bronze medals at the Summer Olympics, all in long-distance races.

In all, Ethiopians won eight medals in Brazil, including two silver and five bronze.

The first Olympic Ethiopian gold medalist was Abebe Bikila, who won the marathon in the 1960 Olympics in Rome while racing barefoot. Bikila successfully defended his title at the Tokyo Olympic games in 1964 while wearing shoes.