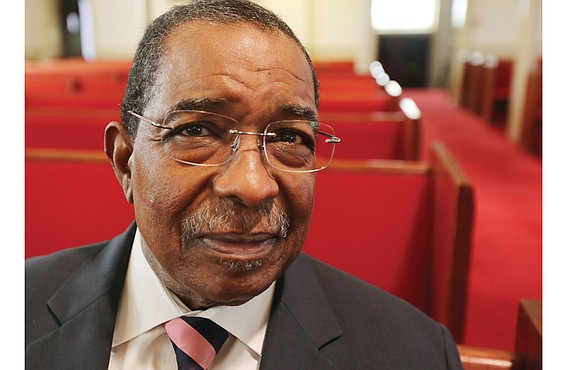 Ebenezer Baptist Church in Jackson Ward soon will be looking for a new pastor.

Dr. Levy M. Armwood Jr. is retiring after nearly 15 years in the pulpit of the historic church that has occupied 216 W. Leigh St. since 1858, three years before the Civil War.

Dr. Armwood said Sunday that he would preach his final sermon to the nearly 600-member congregation Sunday, June 25, just before he celebrates his 77th birthday in July. His final day as Ebenezer’s pastor is to be Friday, June 30, he said.

The church’s ninth pastor since the church’s founding, he said he plans to rest and relax for a few months before focusing on collecting his sermons for publication.

His decision to step down will wrap up his dual careers in education and church ministry that span 48 years.

A Washington native and graduate of Howard University, Dr. Armwood spent 32 years as a music educator for Richmond Public Schools. Hired soon after he graduated from Howard in 1967, he taught at eight city schools, including Thomas Jefferson High and at the regional Maggie L. Walker Governor’s School. He retired from RPS in 2000.

He also was an adjunct music professor at Virginia Union University for 12 years. He taught classes in voice and humanities and provided classes in music methods for elementary school teachers.

Along with teaching in city schools, Dr. Armwood started his career in ministry as director of Ebenezer’s Sanctuary Choir in 1968. Three years later, he became the church’s minister of music while continuing to direct the Sanctuary Choir, which he led until 1992.

While heading the music ministry, he was licensed as a minister in 1982 and earned a master’s of divinity from VUU in 1988 in preparing for church leadership.

In 1992, he got his first opportunity to lead a church when Providence Baptist Church in Ashland called him to the pulpit. During his tenure there, he earned his doctorate from VUU.

Dr. Armwood led the church for 10 years before he was called to serve as pastor at Ebenezer Baptist in 2002. He was officially installed in 2003.