The VSU Trojan Explosion works for its showmanship and sound 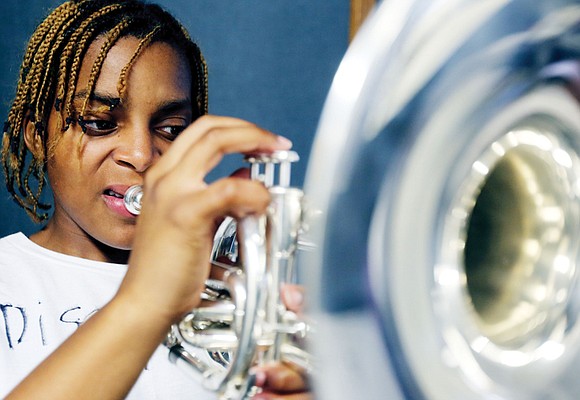 Eshauna Parrish-Foster, a sophomore from Chesterfield County, is the section leader for the mellophones and trumpets in the marching band. Regina H. Boone/Richmond Free Press

It is 5:45 a.m. and the early August sun is beginning to rise over the Appomattox River. Just north upon a hill, 115 students scurry out of dormitories that are largely empty until fall classes  begin.

For the next two weeks, the Virginia State University Trojan Explosion will undergo grueling but invigorating work to boost their sound and their physical condition. The members, tired beyond measure at the end of the day, embrace it all in a determined quest to maintain their leading reputation within the CIAA and beyond.

“At 6 a.m., we start our calisthenics,” said James Holden, who has directed the Trojan Explosion for the past 33 years.

The exercises include jumping jacks, high-knee lifts, running in place and push-ups to get band members in shape for the season. Training continues with a jog from the music hall to VSU’s Rogers Stadium, the 7,900-seat venue that will serve as the band’s showplace to spark excitement among fans and boost team spirit at home football games.

On this day, the band is dressed in navy shorts and white T-shirts with the mantra “discipline” written on them in black permanent marker. They march their way around the track and trot up and down the bleachers while singing cadences in unison such as, “I love the band, I love the band, the best band in the land.”

In total, they march and jog nearly 2 miles.

To most, this seems strenuous with no correlation to improving the sound of the band, but to the veteran director, there is more to be gained by the group exercises than just physical stamina.

“What it does is create unity in the band,” Mr. Holden said. “It creates being able to march together as a unit.”

The practice has paid off.

Satin Diva flaggers, from left, Tiara Coleman, a freshman from Chesapeake, Aiyhana Murdock, a senior from Richmond, and Brianna Trice a sophomore from Chesapeake, make the moves that are coordinated with the band and its music.

The 115-member Trojan Explosion, with a reputation as one of the best bands in the CIAA, was invited to compete in 2012 in the Honda Battle of the Bands, a national showcase for an elite few from historically black colleges and universities that can bring grants of $20,000 to each school’s music program.

On Friday, Sept. 1, the Trojan Explosion will be competing closer to home against Norfolk State University in the Labor Day Classic Battle of the Bands at Joseph G. Echols Memorial Hall on the NSU campus.The band also is in constant demand to perform at VSU-related programs.

For psychology major and three-year Trojan Explosion piccolo player Gianna Green, joining the band was not on her radar when she first arrived at VSU in August 2015. But the band’s reputation and the pitch by members at a food truck convinced her to sign up during freshman Welcome Week.

“We’re a big family and we all love what we do,” said Ms. Green.

She said playing with the band allowed her to continue her passion for the piccolo, an instrument she took up in fifth grade.