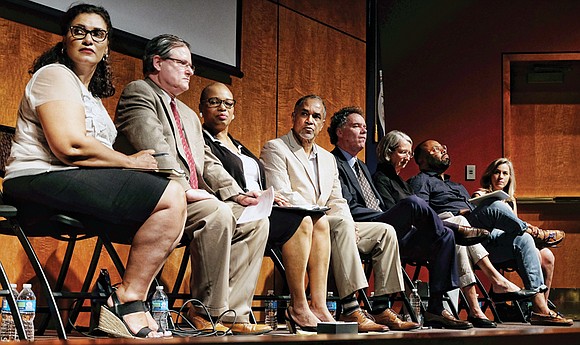 The commission posed two questions to the audience packed with more than 500 people — How do you best add context to the statues of Confederates on Monument Avenue, and what statues of persons or events would you like to see added?

About half of the 40-plus speakers allowed during the two-hour meeting spoke in favor of adding some kind of context to the five Confederate monuments along the city’s tree-lined thoroughfare. The other half passionately asked that the statues either be taken down or left untouched.

Despite admonishment from Gregg Kimball, the commission co-chair and event moderator, audience members sporadically booed, jeered and interrupted the speakers. The speakers were selected through random numbers drawn by commission members. But as the comments became more fervent, the format was abandoned, and the audience became loud and raucous.

audience members who want the Confederate statues to remain untouched on Monument Avenue hold up signs against any context being added.

Jane Hoover said her maternal grandfather was one of many children who helped in the unveiling of the Jefferson Davis monument in the summer of 1907. She insisted the Confederate statues are all dedicated to honorable men.

“Remove not the ancient landmarks which thy have set,” Ms. Hoover quoted from the Bible’s Book of Proverbs. “Nobody publicly contextualizes or judges Maggie Walker, Arthur Ashe or the Lincoln monuments in Richmond. Who are you to publicly contextualize or judge Maury, Lee, Stuart, Jackson and President Davis’ monuments?”

“Only the ignorant, uneducated people will look upon these statues as a hateful, racist symbol,” said Kathleen Beilstein, who said the statues should remain untouched.

“If Mayor (Levar M.) Stoney has his way with the added context, I hope it will be beautiful plaques and not mar or degrade these bigger than life historic statues which represent our heritage.”

But many speakers said the statues should be removed.

“I stand here on the backs of my ancestors who helped build Virginia. However, I do not see that reflected on Monument Avenue,” said Thelma Brown.

The appropriate “context,” she argued, belongs in school lessons, not on the monuments along the avenue. “They should go down. There’s nothing heroic about it and it’s painful to this day.”

Pointing to recent rallies in Charlottesville by white supremacist and Ku Klux Klan groups to preserve Confederate monuments there, Fredericksburg resident George Knight said, “When we say we can avoid what’s going on in Charlottesville by just letting the statues stay up, we’re just saying, ‘I’m too much of a coward to stand up to white supremacy and to stand up to racism.’ ”

He then chided Confederate supporters at the meeting for their deep affection for “participation trophies,” and shouted, “Down with white supremacy!”

“We’re cementing in this moment that one option was never considered,” said Jaynell Pittman-Shaw of Richmond. “We just went straight to context. And I think by doing so, we eliminated a whole group of opinions (and) a whole group of constituents.”

Dr. Kimball said the evening’s charged atmosphere and emotional responses were no surprise.

“It’s a very passionate topic. It’s about our ancestors, and nothing’s more personal than family,” he said after the meeting.

He said he hopes more concrete ideas about context will emerge at the commission’s next public hearing 6:30 p.m. Wednesday, Sept. 13, at the Virginia Historical Society, 428 N. Boulevard.

A handful of participants brought specific ideas for adding context to the Monument Avenue statues.

A mixture of applause and groans emanated from the audience.

People line up outside the Virginia Historical Society for the Aug. 9 public hearing on the Confederate statues along Monument Avenue.

A woman who identified herself as a Monument Avenue resident, was moved to tears as she spoke in support of dedicating a statue to Richmond native and former Gov. L. Douglas Wilder, the nation’s first elected African-American governor.

“Don’t you see?” she said as the crowd snickered. “That was such an important moment when he was elected governor,” she sobbed. “It sort of completes the story of Virginia.”

Among the other suggestions were adding billboard-like signs with factual bullet points; adding a monument for African-American Confederate soldiers; and dedicating a separate row of monuments along the Boulevard to honor African-Americans.