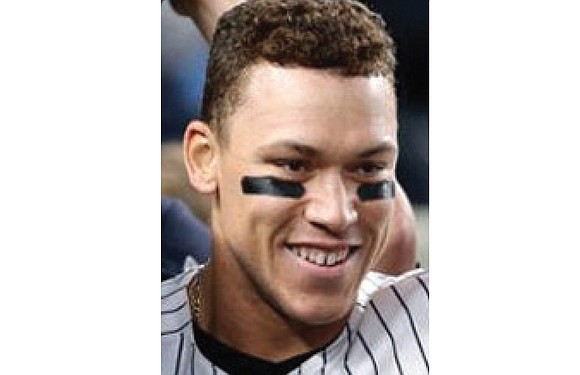 Aaron Judge wears No. 99 on his New York Yankees jersey, but ranks No. 1 in other important categories.

The rookie right-fielder leads the American League in home runs (28) and runs batted in (63). He also is the runaway leader in attracting All-Star votes.

The head-turning California native accumulated more votes — some 4.9 million — than all others and will start in right field for the AL in baseball’s midsummer classic, the MLB All-Star Game, on Tuesday, July 11, in Miami.

All-Star voting was conducted by fans May 1 through June 29.

The 6-foot-7, 270-pound Judge also is expected to flex his considerable muscles in the annual Home Run Derby on Monday, July 10. The Miami Marlins’ Giancarlo Stanton is the defending champ.

The player coming in second in AL voting is the league’s shortest all-star, 5-foot-6 second baseman Jose Altuve of the Houston Astros.

The AL’s other African-American starters will be outfielders George Springer with Houston and Mookie Betts of the Boston Red Sox. Betts replaces the injured Mike Trout of the Los Angels.

There are no African-American National League starters.

Judge does everything to excess — even strike out. His 101 whiffs were first in the AL.

Yankee right-fielders are no strangers to records.

Yet another former Yankee right-fielder, Reggie Jackson, holds the major league record for most strikeouts in a career — 2,597.

While African-Americans are scarce on the All-Star rosters, there is no shortage of players of color from Caribbean nations.

The starting third baseman for the National League will be Miami’s Marcell Ozuna from the Dominican Republic. Ozuna is one of five NL All-Stars from the Caribbean.

Before Jackie Robinson broke the color barrier in 1947, dark-complexioned Latinos, like African-Americans, were banned from Major League Baseball.

Of the 32 players on the AL All-Star roster, 16 hail from the Caribbean.

African-Americans made their MLB All-Star debut in 1949, two seasons after Robinson’s debut with the Brooklyn Dodgers.

The first person of color from the Caribbean in an All-Star game was Cleveland outfielder Minnie Minoso in 1951. The Cuba native played in the Negro League All-Star games in 1947 and 1948 with the New York Cubans.