What’s next for Yankees’ Judge? 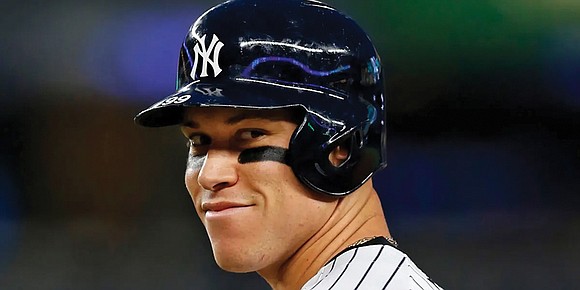 For Aaron Judge, one question has been answered. Yes, following much speculation, the votes have been counted and he is the American League MVP.

But one question remains.

Who will the New York Yankees’ outfielder be playing for in 2023? Will he continue to wear pinstripes in the Big Apple, or seek employment elsewhere?

There are many suitors.

The 30-year-old free agent is coming off one of the elite seasons in big league annals. He set the AL record with 62 home runs, while also leading league in RBI, slugging percentage, and on-base percentage.

Among the franchises that might lure Judge are San Francisco, the Los Angeles Dodgers, the New York Mets, the Boston Red Sox and the Texas Rangers.

He could also re-sign with the Yankees.

Judge grew up in the Bay area rooting for the Giants and his favorite player, Barry Bonds.

He won’t come cheap. Judge turned down a seven-year, $213.5 million contract from the Yankees last spring to pursue free agency.

Judge becomes the first Yankees outfielder to win MVP since Mickey Mantle in 1962. Third baseman Alex Rodriguez won in ’05 and ’07. Before that, the Yankees’ last MVP was first baseman Don Mattingly in ’85.