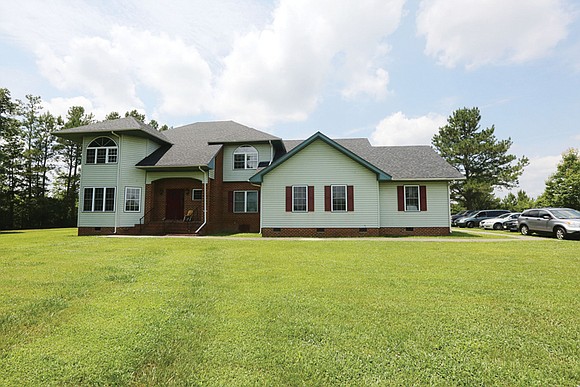 A series of fundraisers are planned to save the Southampton County home and land of H. Khalif Khalifah of Drewryville, which according to community folklore, is the birthplace of Nat Turner. Photos by Regina H. Boone/Richmond Free Press

When H. Kahlif Khalifah purchased land in Southampton County in 1990, he learned prior to the purchase that it was, according to community lore, the birthplace of Nat Turner.

Mr. Turner, an enslaved preacher, led a bloody and historic rebellion of 70 enslaved people in 1831 in which roughly 60 people were killed, including Mr. Turner’s owner.

“Finding (the property) was accidental,” Mr. Khalifah said, noting its historic value and his efforts since then to offer tours about Mr. Turner’s life, his rebellion for freedom and ultimate execution.

Mr. Khalifah, 77, an independent book publisher and author, keeps a library and meeting room in his home 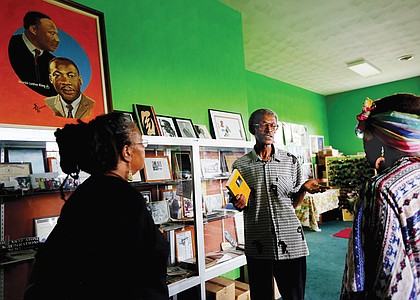 H. Khalif Khalifah, center, speaks to visitors in the Nat Turner Library in his home during last Saturday’s fundraising event, “The Resurrection of Nat Turner: Save the Land.”

dedicated to Mr. Turner and works about African-American progress toward freedom and advancement by such writers as Malcolm X and Kamau Kambon.

But Mr. Khalifah said his home and the 20 acres it sits on is in jeopardy of being sold. To help stave it off, he held “The Resurrection of Nat Turner: Save the Land,” the first of multiple fundraisers planned at the Southampton County site to keep the property in the Khalifah family.

The event last Saturday drew about 20 people from nearby counties, Richmond and as far as Maryland. Many said they came to learn about their history as African-Americans. They took the Nat Turner Trail Tour led by Mr. Khalifah, dined on home-cooked food and shopped at an African marketplace set up in the library, featuring books, soaps and jewelry.

Mr. Khalifah’s home is located in Drewryville. He also has another 102 acres that are adjacent. He uses the land behind the house to teach young African-American teenagers in the county about gardening and agricultural basics.

The garden is filled with vegetables and flowers, including tomatoes, squash and sunflowers.

Losing the land, Mr. Khalifah said, would put his community efforts at risk.

“What would be lost are those young men who come and use these woods, our organic garden and learn how to farm,” he said. “But the most important thing (they do) is to learn how to be a black man in the oppressive system known as the United States.”

He said he has filed for bankruptcy protection under Chapter 13.

Court records show that Mr. Khalifah filed for bankruptcy five times between 2000 and 2014 but all were dismissed. He filed a sixth time in 2015, but it has been continued.

Only the home and 20 acres are in jeopardy of foreclosure, Mr. Khalifah said, adding that he is considering selling 50 acres of the vacant land to save his home and the library he has established.

“I’m not the only one fixed on preserving the history and legacy of Nat Turner,” he said. “Opportunity is there” for people to understand the legacy, “but our people are suffering for lack of information on what to do with it and how to take advantage of it.”