What’s all the Hoopla? 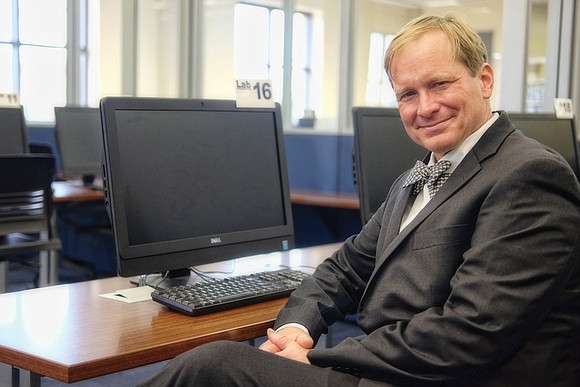 Scott Firestine, director of the Richmond Public Library, sits in one of the smaller computer labs available to the public in the library’s Main Branch at 101 E. Franklin St. in Downtown. Patrons can use the computer lab to access the library’s expanded array of digital materials. Sandra Sellars/Richmond Free Press

The Richmond Public Library just doubled its offerings of books, music, movies, TV shows, video games and other items, and it didn’t have to buy anything.

According to Library Director Scott Firestine, the library did it by hooking up with an online website called Hoopla and making the items available to patrons through its online library that is open 24 hours a day, seven days a week.

He said Hoopla offers about 600,000 items on its website — equal to the total number of physical items available at the Main Library in Downtown and its seven open branches. (The West End Branch on Patterson Avenue, now under renovation, is expected to reopen by September.)

Library patrons will be able to borrow up to four items a month from Hoopla without charge, Mr. Firestine said, simply by using their increasingly powerful library card numbers.

The new connection to Hoopla, which is to go live on Thursday, June 1, is one way that the resource-short library is using online services in carrying out its mission: “To inform, enrich, empower.”

Amid struggles to staff library branches and maintain adequate hours, Richmond is re-inventing itself using the library card as a key to expand access to information and other resources — from continuing education courses and legal forms to newspapers and magazines.

A pilot project this summer will involve 300 students enrolling in the summer program of the Mayor’s Youth Academy.

Mr. Firestine said the students will be able to use their library cards to ride GRTC buses and use the exercise facilities at the YMCA. And the access could expand if other programs sign on.

His hope is that the program will prove a success and secure resources for expansion.

He said the ultimate goal is to have every Richmond Public Schools enrollee receive a student ID that can double as a library card and also open up access to other services. He said Louisville, Ky., and Charlotte, N.C., already issue such multiuse student IDs.

“It would be great if Richmond could do the same thing,” he said.

If that doesn’t happen, he said the library will be working on a way to ensure every child in Richmond is enrolled as a library patron as soon as he or she is registered for school.

Hoopla is one way the library is overcoming longstanding shortfalls in its budget for purchases. Instead of buying the items, Mr. Firestine said that the library would pay a $1.60 fee for each transaction a patron makes with Hoopla, a far cheaper way than buying physical resources.

‘We obviously have to cap the amount of borrowing that people can do online,” he said, “but this means people can get items without having to actually come into our buildings.”

He and others at the library also realize that most people no longer care “whether they get the latest James Patterson novel on a device or in print,” he said.

While Richmond Public Library has done little to toot its digital horn, it has been boosting its internet offerings for years in seeking to be “the location for lifelong learning,” Mr. Firestine said.

“People consume information in different ways. It depends on the generation,” he said. “We want to able to accommodate those who need to touch and feel an actual book and those who are just as happy to get an electronic version on their phone.”

That includes having robust digital resources and a strong website.

He said patrons already can download books through another digital website, Overdrive. “Hoopla has items that Overdrive does not, and Overdrive has items Hoopla doesn’t,” he said.

The library now has 16 online offerings, ranging from ABCmouse, a learning tool for preschoolers, to Value Line, a stock research tool.

In between, patrons can gain access to current and archived newspapers through America’s News; take courses and practice tests to prepare for exams needed for a government job, to get a high school equivalency degree, enroll in college, go to medical or law school or become an American citizen on LearningExpress Library 3.0; and get access to reference books and magazines through Literati Public.

The library also offers links to TumbleBook Library’s resources and books for children and the TumbleBook Cloud for Teens that offers graphic novels and ebooks for middle and high school students.

And adults can gain access to free legal forms, audiobooks and continuing education courses on everything from cooking and gardening to pet care, art, music and computer technology.

City library patrons also have access to branch libraries in Henrico and Chesterfield through reciprocal agreements.

Through the computer and mobile phone, the library is now seeking to provide easier and free access to newspapers and other resources that are “no longer free.”

“We’re doing all we can to be the information destination of choice,” Mr. Firestine said.