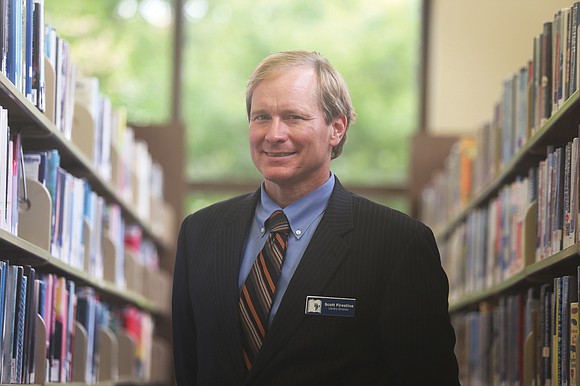 Scott Firestine, director of the Richmond Public Library, stands in the new children’s area at the Main Library in Downtown that includes computers for young patrons and their parents to use. The glassed-in area behind Mr. Firestine contains the new innovation center that is equipped with a 3D scanner, printer and other modern technology, which are among multiple changes happening inside the building at 101 E. Franklin St. Photo by Regina H. Boone

That’s his description of the changes sweeping through the Main Library in Downtown.

Along with halting fines on materials that children and youths borrow and expanding distribution of library cards to provide physical and online access to books and materials, Mr. Firestine is leading an overhaul of the way the space is used in the building.

On the first floor, the change includes the relocation of the children’s area to a far bigger space on the Main Street side of the main reading room; expansion of the area for teens by moving out bookcases filled with nonfiction items; and the creation of a public innovation center that allows patrons to learn how to use a 3D scanner and printer, a fabric printer and virtual reality equipment in a former reference space.

The second floor reading room also is now dominated by public use computers, with the stacks of magazines that once filled an array of shelves moved to the basement. Current editions of magazines are limited to built-in holders along two walls. The revamp is aimed at making the space livelier, more open and more attractive to patrons, Mr. Firestine said.

At a time when people can get books and music on their cell phones and find much of the information they need on the internet, libraries are being challenged to find ways to remain relevant, he said.

“We needed to rethink how we present ourselves,” he said.

Patrons also have been urging change, he added, citing the modern facilities and range of offerings at libraries in Henrico and Chesterfield counties. The Richmond library already has invested in technology and made it simple to access and borrow online without charge music, videos, movies and other items. Mr. Firestine noted that if all goes well, by end of the year the library should be able to upgrade the computer catalog to make it easier for people to find, check out and renew materials using a phone app.

In June, the library also ushered in a fine-free program for patrons 18 and younger. “No matter when they bring the items back, they can borrow more and not face a fine,” Mr. Firestine said.

But just as important, Mr. Firestine said, has been the makeover of the Main Library’s physical space. Located at 101 E. Franklin St., the Main Branch is actually two buildings — the original Dooley Library that opened in 1932 and the larger addition on the east side that opened in 1972. One big step has been to open up the space in the 1972 addition. That includes clearing out many of the big bookcases. While the mystery and fiction bookcases still fill the Franklin Street side of the room, the bookcases with nonfiction items on the 1st Street side are gone, helping to create a larger, more open sunlit area for teens and children. A couple of shelves that feature new books and other items are all that remain.

Mr. Firestine said the collection of older material was moved into empty spaces in the bookcases on the building’s 2nd Street side or relocated to the basement stacks, from which they can be retrieved.

With the change, the law library now has more room. The reconfiguration also includes combining the circulation and reference operations. Instead of checking out or returning material near the front door, patrons do so at the huge center desk in the reading area where they also can ask questions and get help locating items.

The changes have not pleased everyone. Longtime library patron Sidney Simmons, who loved browsing the art and history sections, was shocked to find many of the books he once could take off the shelves had been relocated to the basement stacks.

“We’re talking about the large art books,” he said. Instead of being able to select the book he wanted to look at, he now has to look up a specific title in the computer catalog and ask a librarian to retrieve it. “I didn’t want to have to do that,” he said. He also noted the large array of history books, particularly those on Richmond history, are no longer easily available.

Mr. Firestine acknowledged that some of the changes will require getting used to. Currently, the basement cannot be opened to patrons.

The shows will go on — soon

Three cameras nearly fill a second floor room at the Main Public Library in Downtown — the new home of a public access TV station for Richmond residents to have their own shows.

But the cameras and programming have yet to begin broadcasting.

“Everything is ready to go,” said Library Director Scott Firestine. “We’re just waiting for Verizon to finish installing its equipment so we can simulcast via Fios as well as Comcast.”

The space at the library replaces a studio on Arthur Ashe Jr. Boulevard that Comcast previously operated for 27 years at no charge that enabled Richmond residents to air their own live and prerecorded programs. Comcast ended the service for Channel 95 last November after reaching an agreement with the Richmond Public Library to take on the studio.

At that time, Mr. Firestine said he anticipated quickly getting the station back on the air after obtaining the equipment and cameras from Comcast.

However, in an update Monday, he said his hopes were stymied by Verizon’s slow pace. He said the company finally has installed lines to connect to the Fios service and now needs only to install a final part. He said the library has a list of people waiting to provide programming. Mr. Firestine also said he envisions programming focusing on Richmond Public Library’s services.

“It’s been frustrating, but I’m told everything is close,” he said.

If all goes well, Mr. Firestine said, the station could be on the air within a few weeks.