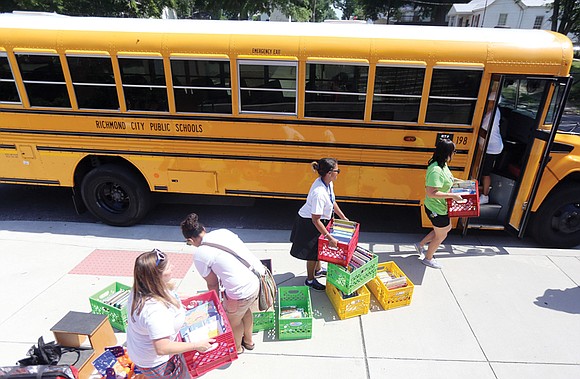 Teachers at Oak Grove-Bellemeade Elementary School load books onto the school’s R.E.A.D. Bus for its initial run Wednesday in neighborhoods in which the school’s students live. R.E.A.D. Buses from 20 of the city’s 24 elementary schools are part of the Reading Riders program to encourage students to read during the summer. Photos by Regina H. Boone/Richmond Free Press

The program was so successful that in 2016, RPS replicated the program at 17 schools.

This year, 20 of the city’s 24 elementary schools will participate in the program. Buses loaded with summer reading materials will stop in several neighborhoods within that school’s district.

The Reading Riders Summer Book Buses started their routes this week and the R.E.A.D. Buses, Read

Everyday to Achieve Dreams, will run from 3 to 7 p.m. each Wednesday through Aug. 2.

Each school is responsible for developing its mobile library’s route. Information about routes and stops are available by contacting the elementary schools, while some routes have been posted on www.rvaschools.net.

Mary Townes, principal at Oak Grove-Bellemeade Elementary School, said the idea for a mobile library arose from an educators’ convention in Dallas in 2014.

“We met Dr. Richard Allington, who is well known for reading and summer slide prevention,” she said. “He has done lots of research on language arts and reading.” 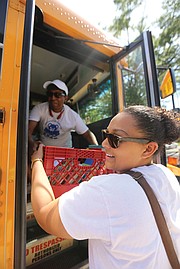 Summer slide refers to students not retaining during the summer what they learned during the school year, resulting in teachers having to get students up to speed when they return to school in the fall.

While some parents alleviate the problem by enrolling their children in summer enrichment programs, the price tag is often high, leaving an unmet need for students and parents in lower-income brackets who may not be able to afford such programs.

“One of our reading specialists found out about a school in Norfolk that was providing books for elementary schools over the summer,” Ms. Townes said. “In their model, parents visited their specific schools weekly, which had tables set up for students to check out books.”

Ms. Townes and her team at the South Side school liked the idea and took it one step further. They developed the idea of a bus making stops to deliver books in communities where the students live, eliminating the issue of transportation that may have prevented many RPS families from participating.

Under Ms. Townes’ leadership, the Oak Grove-Bellemeade team developed a proposal in the fall of 2014, and by the last day of school in June 2015, they had teacher volunteers, a generous donation of books, a bus from RPS and a schedule of five stops.

“We surpassed expectations for the first year,” Ms. Townes said. “A car went into the area prior to the bus, and a passenger in the car with a megaphone would announce the bookmobile was coming.”

Popsicles, water and fruit purchased with money from sponsors were given to youngsters who came to the mobile library.

During the stops, books are distributed to students and exchanged the following week for a new read. Teachers bring a familiar face to the process, serving as “librarians,” Ms. Townes said, noting that student interest has been high from the beginning.

“Last year, we were seeing 200 students per week on our route,” Ms. Townes said. “Some of them were older than fifth-graders, but we factored that into our plan, and have books for older students, too.”

This year, Ms. Townes said, a new bonus will be added to Oak Grove-Bellemeade’s R.E.A.D. Bus. When a youngster checks out a book, a teacher or parent will read the first page to the student “to help get them started,” she said.