REAL House to help former inmates on road to recovery 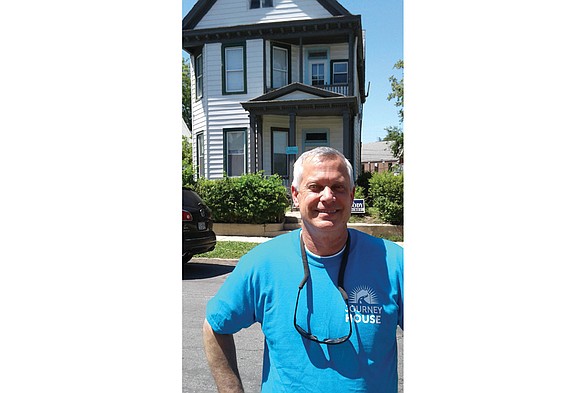 A grand opening for the REAL House, established by Michael J. “Mike” Tillem at 2201 Dinwiddie Ave., is scheduled for Tuesday, May 16.

Michael J. “Mike” Tillem is helping to solve one of the most vexing problems facing addicts who are released from prison — a place to stay where they can continue their recovery.

The 55-year-old Henrico County resident, a recovering addict who spent time in prison years ago, is developing homes in the Richmond area where small groups of the formerly incarcerated can live and work on staying sober.

Next week, Mr. Tillem will join Richmond Sheriff C.T. Woody Jr. in opening his first recovery house in Richmond — a modest two-story home at 2201 Dinwiddie Ave. in South Side.

The grand opening is 5:30 p.m. Tuesday, May 16, to showcase the new effort to provide transitional housing for such individuals, according to Dr. Sarah Scarbrough, director of the Richmond Justice Center’s internal programs to bridge the gap between incarceration and re-entry.

Dubbed the “REAL House,” the residence provides bed space for two house managers — Charles Greene and Antonio Ingram, both recovering addicts themselves — and up to seven other men who have participated in the Recovering From Everyday Addictive Lifestyles (REAL) program in the Justice Center.

Mr. Tillem worked with Sheriff Woody to create the house. Its mission, he said, is to become a place where individuals seeking to overcome addiction “find gratitude, grace and purpose on their road to recovery.”

“The REAL House is a dream come true for us,” said Sheriff Woody, who is delighted to be able to provide some departing jail residents “a place to lay their heads as they continue their rehabilitation.”

For Sheriff Woody and Dr. Scarbrough, the house adds a community dimension to REAL, whose aim is to help addicts avoid a return to jail after their release. At the jail, the program couples group therapy and behavior modification with education and skills training.

A study of the program’s effectiveness in cutting recidivism, which Sheriff Woody released Wednesday, found that REAL had little effect on people who participated 60 days or less. Half the inmates with addiction challenges returned to the jail in less than a year on a new charge regardless of their participation in REAL.

Researcher Lisa Jobe-Shields of the University of Richmond found that the program reduced recidivism when people were in the program at least 60 days and had the most impact on those who participated in the program for at least 90 days.

Only about 30 percent of people in the program for 90 days or more were arrested again within a year. That’s one benefit of REAL House, officials said. It will extend residents’ time with the program.

While the first in the city, the house on Dinwiddie will be the fifth Mr. Tillem has developed through his company, Journey House.

He has created four others in Henrico County, including one for women and one for men to stay up to a year. There also are two rental homes where men who stayed in the first house can continue to share a house on a more permanent basis.

Mr. Tillem and his wife, Kimberly, previously opened a social service center for women and children called The Sophie House. After leaving that operation, he came up with the idea of creating a business focusing on the housing needs of recovering addicts

The REAL House is not inexpensive. Residents are asked to pay $135 a week or $540 a month, Mr. Tillem said.

He said the residents would get some time to get their feet.

“People come out without jobs and they need time to find work,” he said. “And they will be working on their sobriety.”

The plan is to give new residents at REAL House at least 45 days to find a job, Dr. Scarbrough said. “We will be helping with that. We think that’s doable.”

Still, everyone who stays will be required to pay their fair share, Mr. Tillem said, except for the house managers who receive free rent for their services.

Based on his experience, he’s expecting some turnover. Usually, he said, only about half of residents can afford the rent.

Mr. Tillem said he tries to employ residents in his property maintenance and landscaping firm. In the summer, he employs up to 12 people, he said.

REAL House will not solve the housing problem that so many addicts face, Dr. Scarbrough acknowledged, despite being a step in the right direction.

Richmond currently has about 350 beds for people with addictions, including CARITAS’ 214-bed Healing Place, located farther east on Dinwiddie Avenue from the REAL House, and the 80-bed Salvation Army center on Hermitage Road.

The McShin Foundation, which focuses on drug rehab, also operates about 80 beds in homes. One or two churches also operate rehab houses.

But most of those places are full and have two- to three-month waiting lists, Dr. Scarbrough said.

Some help is on the way as CARITAS moves forward with plans to develop a women’s recovery center at 2220 Stockton St. that could serve an additional 180 to 200 people. But that still would not cover the need.

Dr. Scarbrough noted that the city jail releases more than 9,500 people a year back to civilian life. She estimates that at least 6,000 of them have addiction challenges that they came to jail with and will leave with unresolved.

About 300 of the released inmates were participants in the REAL program. Among that group, she said about 70 percent are headed back to the homes and neighborhoods in which they developed their addictions because they have no other options.

The REAL House will allow a few more people to be located in a recovery space, she said.

“These men already face huge challenges because of their records in finding work. And they also have to work every hour of every day to avoid a relapse,” Mr. Tillem said. “I just wanted to help.”