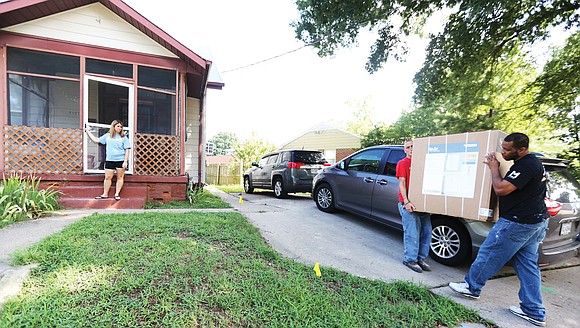 REAL LIFE founder Sarah Scarbrough waits to hold the door as Ryan Riggs, left, a case manager at the home for men in recovery, and Leander Watkins, a resident at the men’s home, carry a new bathroom vanity inside for the new women’s recovery house in South Side. Photo by Regina H. Boone Richmond Free Press

Three single women now have a stable place to stay as they continue their recovery from the addictions that sent them to jail and left them homeless.

The women are the first tenants of a group home opened this week by the nonprofit organization REAL LIFE.

The first occupants were set to move into their new home in South Side on Thursday, Aug. 1.

The new women’s house represents another step in REAL (Recovery from Everyday Addictive Lifestyles) LIFE’s effort to address one of the biggest problems addicts face in trying to stay sober — affordable housing, according Dr. Sarah Scarbrough, the organization’s founder and executive director.

Two years ago, REAL LIFE opened a group home for up to nine men also in South Side. But it just scratches the surface of the need.

That also is likely to be the case for the women’s house, she said, even if her organization gains city permission to expand to five residents.

Housing for addicts will get a boost next year when CARI- TAS opens its new headquarters in a former tobacco factory on Stockton Street in South Side.

Still, Dr. Scarbrough said the need for housing far exceeds what’s available for those who do not have family or friends willing to provide shelter.

She said her program could use 20 houses to whittle down the waiting list for men and women.

Housing is hard to find because newly released addicts usually are starting over with few resources, rents are soaring in the city and landlords often turn them away based on their criminal records.

“What we provide is a hand up,” Dr. Scarbrough said.

As is the case at the men’s house, a house manager will live on site to orchestrate the program.

And just like the men, the newly arrived female tenants will have up to two months to settle in and find work to pay the rent — $135 a week, Dr. Scarbrough said.

In addition to staying sober, each of the new tenants has to agree to share in the chores. They also are responsible for providing their own food and cleaning up after themselves.

The goal, Dr. Scarbrough said, is for the women to get on their feet and find their own place to live within six months to a year so other women can move in.

A former program director at the Richmond Justice Center, Dr. Scarbrough founded REAL LIFE three years ago as a support group for people who enrolled in the jail’s addiction recovery programs who wanted to stay on track.

Then at the jail, she formed the group with volunteers after getting calls from those released needing help with the barriers they were facing — from transportation to clothing to housing to résumé writing.

The nonprofit opened the men’s home in the spring of 2017 and then added a one-stop support center at 406 E. Main St. seven months later where it could provide essential services and help participants find work.

Dr. Scarbrough acknowledges that the women’s house is only a small step to filling the much larger need, but she also notes that it will provide safe, stable and sober housing. Those who stay also will enter without having to worry about money.

“I realized that housing was a continued obstacle as case managers worked with clients, especially women,” Mr. Haverson noted. “By helping REAL LIFE purchase a house, their delivery of comprehensive services can be enhanced and the outcomes improved.”