Top of the ticket 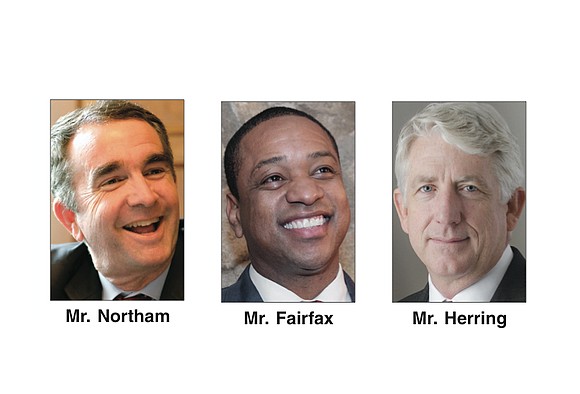 We cannot stress enough the importance of voting in Tuesday’s election for Virginia’s next governor, lieutenant governor and attorney general.

In our view, the Democratic team of Ralph S. Northam for governor, Justin E. Fairfax for lieutenant governor and Mark R. Herring for attorney general is the best choice to lead Virginia for the next four years. They have articulated a vision to keep Virginia moving ahead.

Despite what pundits say, we believe the election is not a referendum on the Trump administration.

Rather, it is a referendum on who voters think is best equipped to lead Virginia through the impact of President Trump’s and the GOP’s Draconian cuts and regressive policies during the next four years.

Make no mistake: The rushed, ill-conceived policies rolling out of Washington will pierce Virginia as they will all the other states. The leadership, vision and backbone of Virginia’s next governor and executive team will determine just how detrimental the changes may be.

Will Virginians elect a governor and top officials who embrace President Trump’s harmful plans to cut health care to thousands in the commonwealth, redirect public funds for education to private schools, put more people behind bars and deport young immigrants in Virginia attending college and holding down jobs?

Or will we elect a team of leaders who are unafraid of standing up for health care for all, strengthening support for public education, fighting for equal justice and protecting the rights of Dreamers?

Meanwhile, the GOP and its candidates shamefully continue the “dog whistle” to the racist elements of Virginia — announcing their support to keep statues honoring the dehumanizing Confederacy; appearing at campaign rallies with a neo-Confederate and Ku Klux Klan sympathizer; and erroneously tying Democratic support for the restoration of felons’ voting rights with an endorsement of child pornography.

We cannot support candidates who want to carry us back. That’s what the Republican slate proposes — on everything from women’s reproductive health issues to criminal justice and voting rights.

That’s why we urge voters to endorse the following:

Following on the heels of the high-energy enthusiasm of Democratic Gov. Terry McAuliffe, Ralph Northam has not electrified the crowds. His style is more like that of Mr. Rogers.

But Virginians must vote strategically in this election, and must looker deeper than style to substance.

As a doctor, Lt. Gov. Northam understands the devastation that health care costs can bring to families. More than 400,000 Virginians are still without health insurance. Changes nationally in the Affordable Care Act, coupled with threats of reduced funding for health programs that cover the elderly, children and the poor, may see that number grow in Virginia.

Lt. Gov. Northam has pledged his support for expanding health care, and will try to soften the blows to health care in Virginia that Washington lands.

Even as he has tried to distance himself from President Trump, Republican candidate Ed Gillespie endorses the health care cuts. He also embraces a plan of tax cuts that would benefit the wealthy and cut more than $1 billion from state coffers.

We cannot abide the harm that a Gillespie administration would bring to the commonwealth.

Our vote is for Lt. Gov. Northam.

An impressive leader with a family history that makes him both relatable and compassionate to others, Democrat Justin Fairfax supports increasing Virginia’s current $7.25 an hour minimum wage, bringing new jobs to Virginia, making higher education more affordable for students and expanding access to early childhood education.

His Republican opponent, Jill Vogel, comes across as charming in television ads, but she is a wolf in sheep’s clothing. While she claims to be an advocate for women’s health, she has supported bills to curb women’s reproductive health rights and sponsored a measure that would have required women to undergo a transvaginal ultrasound before an abortion.

She has blocked efforts to expand Medicaid in Virginia and supports public support for private charter schools.

Our vote is for Mr. Fairfax.

Democrat Mark Herring, who is running for re-election, has been an active and activist attorney general. He has joined with attorneys general from around the country to try to protect Virginians from many of the harsh and unconstitutional policies sought by the Trump administration and the GOP.

He has filed suit to protect reimbursements to the states under the Affordable Care Act, stood up for Dreamers and fought attempts to roll back the ACA’s mandate for coverage of contraceptives.

He has instituted programs to curb gun violence, stop the epidemic of opioid abuse and to protect consumers from out of control banks and corporations.

He believes the attorney general is the people’s lawyer.

Our vote is for Mr. Herring.