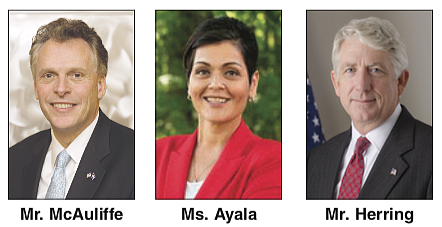 The Nov. 2 general election all boils down to this simple choice — whether the Commonwealth continues to move forward on a path to help boost the lives of all of its people or returns to the narrow, restrictive, exclusionary, racist, misogynistic and homophobic policies and practices that we have fought for decades to overcome.

In this critical election for Virginia’s future, we firmly be- lieve the Democratic team of Terry R. McAuliffe for governor, Hala S. Ayala for lieutenant governor and Mark R. Herring for attorney general is by far the strongest to lead Virginia for the next four years.

After careful consideration, we believe Mr. McAuliffe, Delegate Ayala and Attorney General Herring have the track records, the vision and the backbone to keep Virginia moving forward, unlike their Republican opponents.

We have listened throughout this campaign to the racially tinged rhetoric of the Republican candidates, who would do little or nothing to help African-American families and people of color if they were to be elected. Their interest lies more in banning from public classrooms books and lessons about the truth of America’s racist history throughout centuries of slavery as well as any meaningful understanding of how those racist laws, policies and practices have undergirded systems of inequality and discrimination in employment, housing, education and justice to the present.

They also have expressed little concern about the health and safety of people of color in the pandemic by rejecting vaccination and mask mandates. As the state health department data continues to show, African-Americans and Latinos across the state have been disproportionately impacted in terms of deaths and hospitalizations by COVID-19.

During his first term as governor from 2014 to 2018, Mr. McAuliffe showed Virginians and our community that he stands up for what’s right. He restored the voting rights of more than 173,000 Virginians who had been disenfranchised because of felony convictions.

Voting rights deliberately had been taken away from felons in a rewriting of the Virginia Constitution in 1902 in a targeted move specifically to boot African-Americans from the voting rolls. And it worked. Black people had been disproportionately disenfranchised under that law for decades until Mr. McAuliffe’s actions.

Even when Republicans took him to court challenging his use of an executive order to restore the rights of felons who had completed their sentences and finished parole or probation, Mr. McAuliffe persisted and restored voting rights for those many people on an individual basis.

In his first term as governor, Mr. McAuliffe also began the push to expand Medicaid in Virginia to provide health coverage to hundreds of thousands of uninsured low-income families. While his efforts were blocked by a GOP-controlled legislature, his continued efforts ultimately led to an expansion of the Medicaid program under his successor, Democratic Gov. Ralph S. Northam. Delegate Ayala, as a member of the General Assembly during that time, voted to support Medicaid expansion.

As governor, Mr. McAuliffe pushed to protect the health rights of women, vetoing Republican-backed legislation that would have restricted abortion rights in Virginia and cut funding for Planned Parenthood, an organization that provides comprehensive health care to women.

He also boosted state dollars to public education, expanded pre-school for thousands of children, created jobs and reduced unemployment in Virginia to under 4 percent. He also signed an executive order prohibiting discrimination against state em- ployees based on their sexual orientation or gender identity.

If returned to the governor’s office, Mr. McAuliffe has pledged to boost teacher pay above the national average, provide funding for universal pre-kindergarten programs for 3- and 4-year-olds, expand broadband access to all Virginians and tackle other inequities in the public education system in order to build a stronger workforce.

He also has pledged to expand funding for child care for working parents, accelerate the plan for a $15-an-hour minimum wage and to protect the health care rights of women while expanding the affordability of health insurance in the Commonwealth.

In addition to backing Medicaid expansion, Ms. Ayala voted as a member of the House of Delegates to increase the state’s minimum wage, for tougher gun laws to reduce violence, to legalize marijuana use for adults and to extend eviction protections for renters facing financial hardship during the pandemic.

She also voted to repeal the death penalty in Virginia, a measure that was signed into law earlier this year by Gov. Northam, making Virginia the first Southern state to do so.

Mr. Herring, who is seeking an unprecedented third term as attorney general, has been a fixture in the legal realm of moving Virginia forward. As attorney general, he has gone to court to ensure the removal of the racist Confederate statues from Monument Avenue; to back the case for the Affordable Care Act; and to challenge former President Trump’s order banning Muslim immigrants from coming into the United States.

He also stood up for the rights of gay couples to marry by refusing to legally defend Virginia’s constitutional ban against same-sex marriage.

This election is too important for Virginians — and Black Virginians, in particular — to sit out. We understand the fatigue voters are facing after the whiplash of four crazy years of President Trump and the emotional, financial and social toll of the continuing pandemic.

But we are concerned by recent public spats on radio and social media over the perceived shortcomings of the Democratic Party; about who deserved the party’s nomination to run for Virginia’s governor in 2021 and president in 2020; and how some people believe it will make no difference in the lives of Black people if Mr. Youngkin is elected governor.

Based on Mr. Youngkin’s campaign promises, voting rights immediately would be under attack if Mr. Youngkin is elected. He likely would bring in the fake Trump-backed company to audit Virginia’s voting machines, which underwent a stringent post-election “risk-limiting audit” after the 2020 presidential election that proved the accuracy of Virginia’s results.

Women’s health care and reproductive rights would be abridged under GOP control, along with possible attempts to roll back Virginia’s Medicaid expansion under the Affordable Care Act. Any efforts to end qualified immunity for police officers who abuse, brutalize and kill people would die on the vine. Public money for education would be siphoned off to fund private and charter schools. And we wouldn’t be surprised if the GOP would try to put the Lee statue back up on Monument Avenue.

We can argue from now until the cows come home about who did what to whom and why, but the situation is this: If we don’t get ourselves together by Tuesday, Nov. 2, and vote, we will be in serious trouble if we wake up on Nov. 3 to find Baby Trump, aka Mr. Youngkin, will be the next occupant of the governor’s mansion.

We urge our readers to vote and to support Democrats Terry R. McAuliffe, Hala S. Ayala and Mark R. Herring.