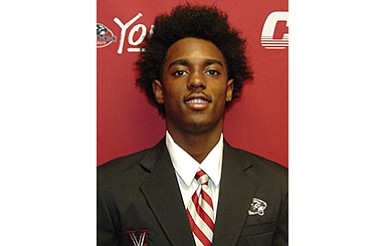 Another game, another star is born.

Jewiston Dawkins is the latest member of the Virginia Union University football team to sprint into the spotlight.

While quiet during VUU’s first four games, the native Floridian cranked it up in the Panthers’ 28-7 victory last Saturday in Raleigh, N.C., against St. Augustine’s University.

Dawkins had four receptions for 136 yards and his first two VUU touchdowns against St. Augustine’s. He’s looking for more Saturday, Oct. 7, in the “Cat Fight” at Lincoln University in Pennsylvania.

The Panthers are 3-2 overall — 2-0 in the CIAA — and will be a prohibitive favorite against the Lincoln Lions. The Lions are 0-5 overall and 0-2 in the CIAA, while being outscored 282-66, including 48-0 this past week at Winston-Salem State University. 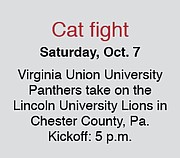 VUU seems to have a bottomless well of receivers, transfers and Floridians. Dawkins qualifies on all accounts.

Dawkins is a long-distance transfer to VUU from the College of Sequoias in California.

Dames had seven catches for 157 yards and two touchdowns in his first major showing. Then he handed the torch to Dawkins in Raleigh.

McKenzie and Kelly have 34 catches between them this season, mostly from Washington native and quarterback Darius Taylor, a transfer from Monroe College in New York.

In all, there are 22 Floridians on Coach James’ roster. Most stem from contacts Coach James established during his South Florida coaching stints at Dillard High School from 2003 to 2005 and Boyd Anderson High from 2005 to 2011.

The 160-pound McKay zigged and zagged for 55 yards at St. Augustine’s and has 231 rushing yards for the season, with an average of 5.3 yards per carry.

Hammond now has picked off at least one pass in three straight games.

Clearly, VUU is in the soft portion of its schedule. Following this Saturday’s game against Lincoln, the Panthers return to Hovey Field to face Chowan University on Saturday, Oct. 14.

The 12-school CIAA would seem to be a league of “haves” and “have nots,” with the “nots” outnumbering the “haves.” The short list of “haves” includes Bowie State and Virginia State university in the North Division, and Winston-Salem State University in the Southern Division, with VUU sitting somewhere in between — at least for now.