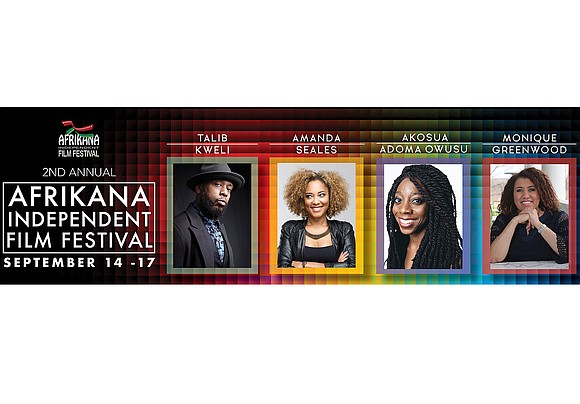 That’s what will be on hand at the 2nd Annual Afrikana Independent Film Festival.

The festival returns this week with a full slate of films, discussions and parties.

The festival launches with a reception and preview screening of “Checked Inn” 7:30 p.m. Thursday at the Black History Museum & Cultural Center of Virginia in Jackson Ward.

“Checked Inn” is a new reality show set to air on the Oprah Winfrey Network. The show features guests at a bed-and-breakfast owned by Monique Greenwood, former editor-in-chief of Essence. A star in the show, she will be on hand for the post-discussion.

The event also will feature the debut of the “Love Jones RVA” exhibit of Jonathan Kirven’s photographs of loving African-American couples.

The screening is 7 p.m., with an after-party that Mr. Kweli will DJ at The Hofheimer Building, 2818 W. Broad St.

On Saturday, short films will be showcased at six Downtown venues between noon and 6 p.m. and then wrap up with a evening show, according to the schedule.

The finale will include a screening of the 2016 film “Insecure” about the trials and tribulations of an African-American woman, followed by a discussion featuring actress and comedian Amanda Seals and an after-party she will DJ.

The finale will be 7:30 p.m. at the Grace Street Theater, 934 W. Grace St. on the campus of Virginia Commonwealth University, with an after-party at The Hofheimer Building.