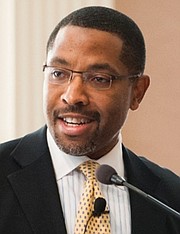 Dr. Corey D.B. Walker may continue to teach after stepping down as vice president and dean of Virginia Union University’s Samuel DeWitt Proctor School of Theology at the end of December.

VUU issued a statement to students and faculty last week that Dr. Walker and the school “have agreed on a transition plan for Dr. Walker to remain … as a professor and scholar-in-residence.”

“He will continue to teach in the areas of religion and society,” the statement continued. “This new role will afford Dr. Walker the opportunity, as requested, to live his call according to his academic pursuits and aspirations.

“We are elated that he has agreed and will continue serving his alma mater.”

The renowned scholar, lecturer and author in the theology field has not publicly confirmed such an agreement. Dr. Walker indicated he planned to take a position at another seminary in Richmond when he announced Nov. 30 that he would resign his VUU leadership posts at the end of the year.

The Free Press has not received a response from Dr. Walker for a request for comment.

VUU also announced it would name an interim dean soon and would begin a national search in January for Dr. Walker’s successor. The search is to be led by Dr. Boykin Sanders, a distinguished professor and chair of the faculty at the theology school, and Dr. Howard-John Wesley, a member of the VUU Board of Trustees and pastor of Alfred Street Baptist Church in Alexandria.

Dr. Walker, a graduate of the VUU theology school, returned 17 months ago to succeed Dr. John W. Kinney, who stepped down as vice president and dean after 27 years on June 30, 2017, but remains a member of the theology school’s 19-member faculty.

As the Free Press reported last week, Dr. Walker’s decision surprised students and fellow professors. He hinted in his announcement that his decision was prompted by a disagreement with VUU President Hakim J. Lucas over his management.

According to a student-written letter to the Board of Trustees that was provided to the Free Press, Dr. Walker’s decision was the result of changes initiated by Dr. Lucas that appear to reduce the graduate theology school’s independence.

The letter states that Dr. Walker had not received permission from Dr. Lucas to fill the “six critical administrative posts” that are vacant, out of a total of 12 positions, because of a hiring freeze.

The letter also claims that Dr. Lucas has downgraded the dean position by requiring Dr. Walker to report to the provost rather than reporting directly to the president.

In addition, the letter alleges that Dr. Lucas has shifted use of $1 million that the theology school received from the Lilly Foundation last year to other purposes.

VUU was among 24 seminaries and institutions awarded a grant through the foundation’s “Thriving in Ministry Initiative” in December 2017. The grant was aimed at enabling VUU’s seminary to link young pastors with experienced clergy who could serve as role models, mentors and guides through the challenges in community ministry.

In addition, the letter alleges that VUU has created financial hardships for its students by withholding part of the federal financial aid those students counted on to pay for food and housing.

According to the letter, VUU waited until the end of November to issue only half of the amount the federal student loans and grants provided for room and board to undergraduates, but has yet to distribute such funds to the majority of graduate students.

The undergraduates are to receive the remaining money when classes resume after the winter break, but graduate students remain uncertain about their money, the letter states.

As a result, the letter calls for a board investigation “regarding these critical issues that impact … our institution.”

VUU officials have not yet responded to a request for comment.