Public sentiment divided on renaming the Boulevard for Arthur Ashe 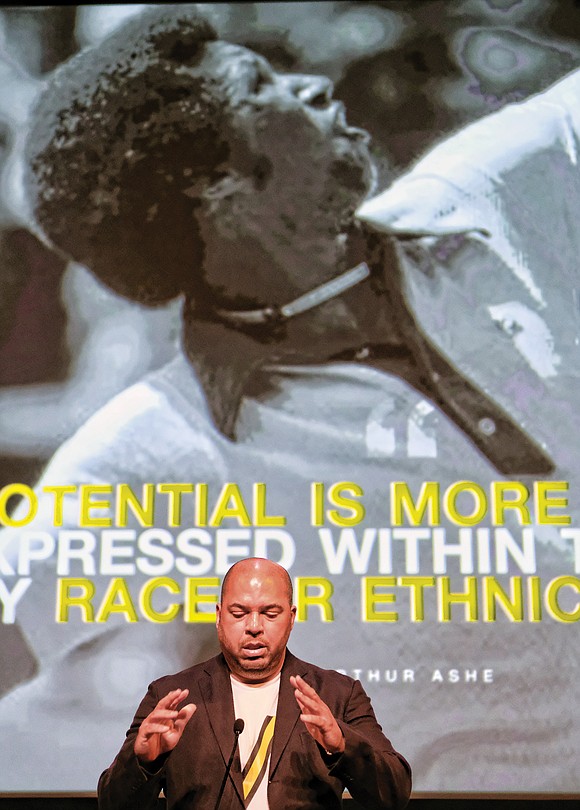 Call it a preview of the coming fireworks over a proposal to rename the historic West End street now simply known as the Boulevard in honor of Arthur Ashe Jr., the late great Richmond-born tennis star and humanitarian.

On Tuesday, just a week before the proposal by 2nd District City Councilwoman Kim B. Gray is scheduled to come before a City Council committee, more than 150 people attended a public hearing on the issue at the Virginia Museum of Fine Arts.

The museum at 200 N. Boulevard would be impacted by such a change.

More than 35 people spoke at the session moderated by David Bailey of Virginia Capitol Connections.

To many, renaming the street for Arthur Ashe is a progressive idea that would show the city has evolved since the era of racial segregation when Mr. Ashe was barred from playing on the Byrd Park tennis courts and forced to leave his birthplace to pursue a sport in which he rose to become the greatest African-American male player in history.

“To me, this is a great opportunity for the city to show our growth and expansion,” said David Harris Jr., a nephew of Mr. Ashe, who got the ball rolling during the summer.

This is the third attempt to rename the street for Mr. Ashe, who died 25 years ago.

But to Christopher Small, a Realtor who makes his home on the Boulevard, the proposal is a bad idea, no matter how worthy Mr. Ashe is and how far it shows the city has changed.

“There are 367 parcels of property up North and South Boulevard,” said Mr. Small, a former president of the Boulevard Association, expressing the viewpoint of many residents and property owners.

“Those 367 parcels generate more than $300 million of tax revenue a year. The City of Richmond owes us to hear our thoughts first,” Mr. Small said. “A name change should come from within the neighborhood, not be forced upon it.”

Other Boulevard residents, who argued that the name change would make it harder to get mail or pizza deliveries, urged Ms. Gray to consider alternatives.

“The Boulevard is the Boulevard and it shouldn’t be changed,” said Edward Lacey, a property owner and developer.

“Boulevard is home. It is the Boulevard, simple and elegant,” another speaker said. “One suggestion is to rename the Downtown Expressway — it’s larger and more visible for all to see.”

Others, including Jerome Legions, president of the Carver Civic Association, called for Ms. Gray to drop the Boulevard idea and consider renaming Belvidere Street as Arthur Ashe Way to provide a fresh view of that thoroughfare.

The public comment hearing — rescheduled from September because of Hurricane Florence — came a day after City Council voted 6-3 to kill a resolution that would have called on the General Assembly to allow Richmond to determine the fate of the city’s most notable symbols of racist hate, the Confederate statues on Monument Avenue.

Ms. Gray, who voted with the opposition on the statue proposal, said after the 90-minute public hearing that she was delighted at the turnout and the variety of comments. But she said she did not hear anything that would lead her to drop the proposal.

Siding with Mr. Harris who asked her to sponsor the legislation, Ms. Gray called the renaming a way “for Richmond to demonstrate to the world that we’ve evolved from the racism of the past and are more accepting of all Richmonders, regardless of their race or nationality.”

Mayor Levar M. Stoney, who was unable to attend the session, has said he is backing the name change, along with the Virginia Museum of Fine Arts and several area civic associations such as the Scott’s Addition Boulevard Association, the Monument Avenue Preservation Society and the West Grace Street Association.

The two largest, the Fan District and Museum District associations, have yet to take a position.

Ms. Gray is uncertain whether a majority of City Council members will support the creation of Arthur Ashe Boulevard.

The proposal first must get through the three-member Land Use, Housing and Transportation Committee, which has included the matter for consideration at its meeting at 1 p.m. Tuesday, Oct. 16.

If it moves out of committee, the proposal could come before the full council as early as Monday, Nov. 13.

Since Mr. Ashe’s death in 1993 at age 49, Richmond has put up a statue to him on Monument Avenue, making him the only non-Confederate to be so honored on the street. His name also has been placed on the Richmond Public Schools’ athletic and convocation center next to The Diamond baseball stadium on the Boulevard.

Supporters of the name change believe Richmond needs to do more to show Mr. Ashe is a hometown hero.

Born in 1943, Mr. Ashe learned to play tennis at the city’s Brookfield Park in North Side that his father managed. The Main Post Office now occupies the area.

Mr. Ashe would go on to lead victorious U.S. Davis Cup teams, including the 1968 team that held an opening round in Richmond. He won more than 80 tournaments as a singles and doubles player, including three Grand Slam singles titles in the Australian Open, Wimbledon and the U.S. Open, and two Grand Slam doubles titles in the Australian and French opens. He retired in 1980 from professional tennis.

Before his death, Mr. Ashe used his global prestige to fight oppression in South Africa and Haiti, raise the profile of African-American athletes with a three-volume compilation of achievements, launch a youth tennis program called the National Junior Tennis League that is still going strong in Richmond and across the country and start the Virginia Heroes youth mentoring program in Richmond.

During the public hearing at the museum’s theater, a slideshow on the screen behind speakers showed images of Mr. Ashe with quotes from him, views of the street and logos with the words “Act,” “Serve” and “Vote.”

“We’re in a great opportunity right now to really … show what it’s like to come together,” said Dontrese Brown, who described Mr. Ashe as “relentless in everything he did for his city — this city we call home. How great is it to be a part of something as dynamic as this, something that really drives through our true spirit?”

“Arthur not only was a champion of tennis, but he was a champion person,” said Lou Einwick, a professional tennis coach and friend of Mr. Ashe, who recalled Mr. Ashe coming to Richmond to teach tennis clinics.

Speaker Maurice Hopkins noted that while Richmond had denied Mr. Ashe, the city now has an opportunity to embrace him.

“I understand it’s difficult,” he said, just as it was difficult to get a statue of Maggie L. Walker developed. “But I want to encourage everyone to take a step forward. Let’s get this done, too.”