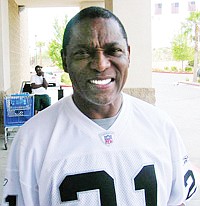 Mr. Branch was found dead in a hotel room in Bullhead City, Ariz. Police said he died of natural causes.

He averaged a whopping 17.3 yards per reception.

A native of Houston, Mr. Branch also starred in track at the University of Colorado, recording personal bests of 10 seconds in the 100 meters and 20.5 seconds in the 200 meters.