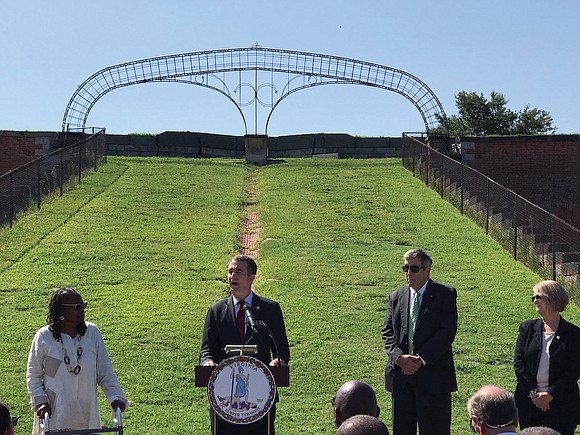 Gov. Ralph S. Northam speaks at a news conference Tuesday in front of the 50-foot memorial arch at Fort Monroe, showing that the letters honoring Confederate president Jefferson Davis have been removed. With the governor are, from left, state Sen. Mamie Locke of Hampton; Glenn Oder, executive director of the Fort Monroe Authority; and Molly J. Ward, former state secretary of natural resources and a former trustee of the authority. Randy Singleton

Gov. Ralph S. Northam praised the state’s removal of Confederate president Jefferson Davis’ name from an archway at the site where the first enslaved Africans arrived in Virginia 400 years ago.

Gov. Northam said at a news conference Tuesday that removing the letters from a 1950s- era archway reading “Jefferson Davis Memorial Park” at Fort Monroe will make the state more “welcoming and reflective of our values.”

Instead of the arch honoring the Confederate and the “Lost Cause,” interpretive signs have been installed on the ramparts at the foot of the hill that contextualize the arch, the park and the full history of Fort Monroe.

The state is hosting commemorative events later this month at Fort Monroe to mark the 400th anniversary of the arrival of the first Africans. The fort sits on what was called Port Comfort, the site used beginning in 1609 as an arrival point for ships headed up the James River to Jamestown.

In August 1619, the White Lion sailed into Port Comfort bearing “20 and odd” African prisoners, ushering in slavery in the English colonies of what was to become the United States.

Later, in 1865, Jefferson Davis was captured by Union forces and imprisoned at Fort Monroe after the Civil War.

“To have a memorial glorifying the president of the Confederacy, a person who worked to maintain slavery, on the same site on which enslaved Africans both first arrived here and were later freed, is not just inappropriate, it is offensive,” Gov. Northam said.

Gov. Northam said the original 50-foot Jefferson Davis Memorial Arch was part of an effort to paint a “revisionist” version of history. The United Daughters of the Confederacy paid the U.S. Army in 1956 to erect the arch to commemorate Jefferson Davis’ imprisonment at the fort. The arch was re-dedicated in 1986.

“Many Virginians, including me, still have much to learn and re-learn about the true and painful history of our Commonwealth,” said the governor, alluding to the race-related scandal that has plagued his tenure in office since February when a racist photo from his 1984 medical school yearbook page became public.

Many people called for Gov. Northam’s resignation. He first apologized for appearing in the photo, which showed a person in black-face and another wearing a Ku Klux Klan robe and hood, and then said it wasn’t him, while admitting wearing blackface to portray Michael Jackson in a dance contest later in 1984 when he was a medical resident.

Since then, the governor has undertaken efforts to overcome the scandal, vowing to stay in office and work for racial equity. His office said he wrote in April to the Fort Monroe Authority, which oversees the site, requesting that the arch be removed. After public hearings and a review, the authority’s trustees decided to leave the decorative arch, but remove the letters, which came down last Friday. The letters will be placed in the Casement Museum at the former military base, which overlooks Chesapeake Bay.

Dr. Rex M. Ellis, associate director of the National Museum of African American History and Culture in Washington and a trustee with the Fort Monroe Authority, told The Washing- ton Post that the arch was significant because of the importance of the site. Not only did the first Africans arrive there, but their enslaved descendants built the fort itself.

Then during the early days of the Civil War in May 1861, Frank Baker, Sheppard Mallory and James Townsend escaped from slavery and sought sanctuary from the Union troops at Fort Monroe. The Union commander, Gen. Benjamin Butler, refused to return them to their slave owners, calling them “contraband of war.”

After that, thousands of African-Americans made their way to Fort Monroe to escape bondage.

“That makes this a significant space and site to discuss African-American history in a way that few historic sites can,” Dr. Ellis told The Washington Post. Honoring Jefferson Davis in that setting, he said, was “anathema to the his- tory that should be taught here. I think it was a great, great service that (Gov. Northam) did” in having the letters removed.