Surviving the journey: Thousands of people gather in a weekend of reflection and healing in Hampton to remember, honor the first Africans brought as captives to English North America 400 years ago 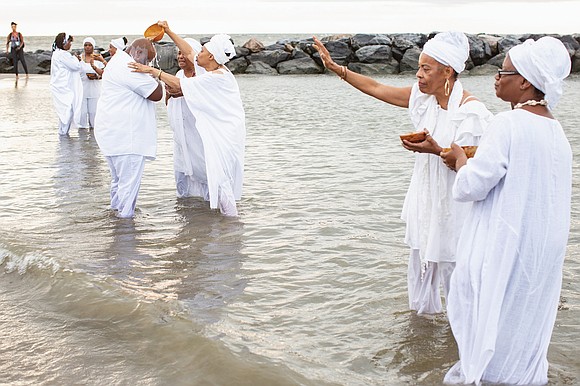 Queen mothers from the Institute of Whole Life Healing in Kentucky anoint participants at a sunrise cleansing and healing ceremony at Buckroe Beach in Hampton as part of the 400th anniversary commemoration of the first Africans landing in English North America. Brian Palmer

As day broke last Saturday, tides of people of all ages and colors flowed down the promenade at Hampton’s Buckroe Beach.

Some were dressed for a day at the shore in shorts and T-shirts, with windbreakers or sweats. Others, all of them black people, were clad in white — gowns over skirts and dresses for many of the women; shirts and loose pants for the men.

The line of people gave their names to two black women sitting at a table, the last step before they would begin the African cleansing ritual and name ceremony for which they had registered long before this day.

A few yards away, three black men in colorful ceremonial robes stood silently on the beach, something they and every black person gathered there would not have been able to do a little more than 50 years ago because Buckroe was, by law, for whites only.

Another robed man, Ancestral Master Drummer Joseph Ngwa from the central African nation of Cameroon, beat his drum to bring together the milling crowd, now in the hundreds. He then blew a horn to signal the pouring of a libation that would summon the ancestors.

Professional photographers and videographers jockeyed for position with observers wielding their cellphone cameras. Then everyone settled in place, encircling the robed chiefs.

Chief Asam Asam Eyong of Cameroon’s Bamoun people led the ritual, pouring liquid from a cow horn onto the sand, then bowing deeply onto a tortoise shell and animal pelt he laid on the ground.

Chief Eyong and the other chiefs then led the assembly in a call and response:

With Mr. Ngwa beating his drum, women dressed in white robes and head wraps, known as the African-American queen mothers from the Institute of Whole Life Healing in Lexington, Ky., led the crowd to the water’s edge.

There, with water from a calabash, pairs of queen mothers anointed the heads of the white- clad men and women who came to them one at a time. One of the queen mothers would gesture, pulling apart her fists as if ripping a cloth.

She was breaking the chains of slavery.

The solemn, yet emotional ceremony at Buckroe Beach was among the most powerful events of the “First African Landing Commemorative Weekend,” four days of speeches, panel discussions, ceremonies and performances marking the 400th anniversary of the 1619 arrival of the first captive Africans in English-occupied North America.

With the exception of Saturday’s daybreak cleansing ceremony at Buckroe Beach and a few others, most events took place at Fort Monroe in Hampton, where “20 and odd Negroes” aboard an English pirate ship, the White Lion, were traded in 1619 for food and provisions at what was then known as Point Comfort.

It, essentially, was the beginning of the slave trade in English North America, a barbaric inhumane practice that would last for centuries, its evil legacy persisting today. By the mid-1800s, more than 12 million Africans had been captured, sold and transported across the Atlantic to the Americas and the Caribbean.