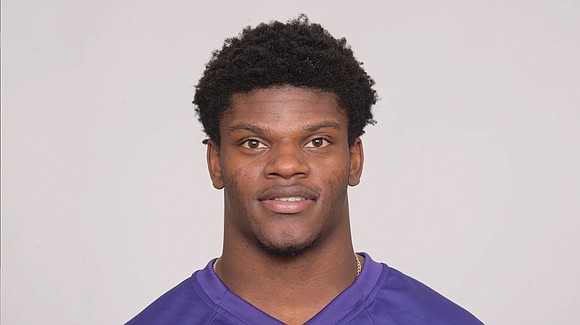 As quarterbacks go, Lamar Jackson has a great arm — and perhaps even better feet.

Jackson, who was drafted by the NFL Baltimore Ravens in the 2018 first round, is on the verge of placing his name at the tip-top of the list for dual-threat quarterbacks.

A national TV audience will be witness Thursday, Dec. 12, as Jackson is likely to break the all-time mark for quarterback rushing yards. Baltimore will play host to the New York Jets, with kickoff at 8:20 p.m.

Jackson, the 2016 Heisman Trophy winner from the University of Louisville, has scored seven touchdowns rushing this season, while averaging 6.7 yards per carry.

It’s not like the 6-foot-2, 212-pound native Floridian is one dimensional.

He has passed for 2,677 yards, with 28 touchdowns and only six interceptions for the 11-2 Ravens.

Once Jackson eclipses Vick for the seasonal record, here are some other milestones at which he can take aim:

• Most rushing yards by a quarterback for a career: Vick, 6,109 yards.

• Most rushing touchdowns during a career: Cam Newton (still active), 58.

Deserving a mention on any “all-time” list is former Canadian Football League standout Damon Allen, who played in college at Cal State-Fullerton. Allen, the brother of former NFL star Marcus Allen, ran for 11,920 yards and 93 touchdowns in a glowing CFL career from 1985 to 1993.