Broadcast: Game will be televised on ESPN

It may be up to two Richmonders to achieve something no one else has been able to do — stop the University of Alabama.

Keep your eyes on orange jerseys No. 99 and No. 12 for Clemson University in the College Football Playoff final on Monday, Jan. 7, in Santa Clara, Calif. 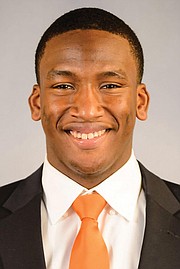 Junior defensive end Clelin Ferrell, No. 99, from Benedictine Prep, and junior defensive back K’Von Wallace, No. 12, from Henrico’s Highland Springs High School, are defensive stalwarts for the South Carolina school. 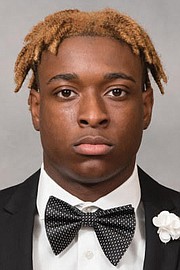 The 6-foot-4, 265-pound Ferrell is a consensus All-American and ACC Defensive Player of the Year. He won the Ted Hendricks Award as the nation’s top defensive end.

Ferrell, who had a sack and fumble recovery in Clemson’s semifinal game of the playoff against the University of Notre Dame, is a sure first round pick in this spring’s NFL draft.

The 5-foot-10, 210-pound Wallace has 46 tackles and seven pass breakups this season for a Clemson defense that ranks with the nation’s stingiest. Wallace had four solo tackles in the easy win over previously unbeaten Notre Dame.

In racing to 14 straight victories, the Clemson Tigers outscored their opponents 620 points to 181. The Tigers dominated Notre Dame with 588 yards total offense to just 248 for the Fighting Irish. 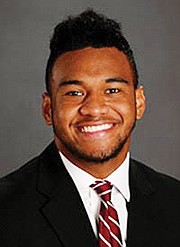 Still, Clemson’s defense will be sorely tested by an Alabama juggernaut seeking its third national title in four years while being led by quarterback Tua Tagovailoa. The left-handed native of Hawaii has been brilliant this season as a sophomore, earning Heisman Trophy runner-up honors behind the University of Oklahoma’s Kyler Murray.

Tagovailoa hit 24 of 27 passes for 318 yards and four touchdowns against Oklahoma in the Dec. 29 semifinals.

Clemson’s quarterback is 19-year-old freshman Trevor Lawrence, who hit 27 of 39 passes for 327 yards and three touchdowns in the Tigers’ rout of Notre Dame.

Give Tagovailoa time and room to throw, and he is capable of picking apart any defense in the nation, including Clemson’s.

While there are 129 schools in the NCAA’s Football Bowl Subdivision, or FBS, the same ones seem to be left standing at the end.

This will be Alabama’s and Clemson’s fourth trip to the four-team national playoff started in the 2014-15 season.

The two state-supported schools are located just 326 miles apart — about a 5½-hour drive down Interstate 85 and I-20.

College football’s top tier, the FBS, didn’t introduce a true playoff system until 2014-15, and then with just a four-school draw.

By contrast, smaller divisions have been utilizing more extended playoffs for decades.

• The NCAA Division III began its playoff system in 1973 and now has 32 entries.