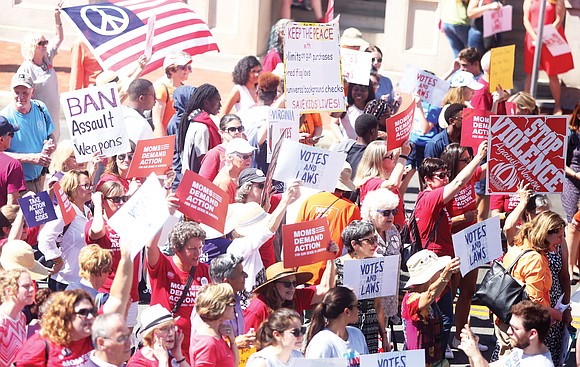 Passionate gun control supporters rally at the Bank Street entrance to the State Capitol Tuesday, but ended up disappointed after the General Assembly halted any consideration of the measures until Nov. 18. Left, two gun rights advocates brought their weapons to the rally. Virginia is an “open carry” state, meaning it is lawful to openly carry a firearm. Photo by Regina H. Boone

Slender Republican majorities in the House of Delegates and state Senate abruptly adjourned the session rather than take up any of the proposed legislation and face heat for killing the bills they oppose.

A frustrated Gov. Ralph S. Northam and his Democratic allies who are pushing tougher gun laws in Virginia vowed to take the issue to voters who will elect all 140 members of the General Assembly on Nov. 5. 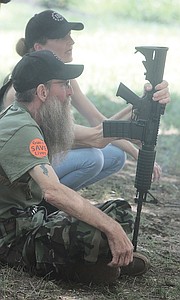 The governor called the special session in the wake of the May 31 massacre of 12 people at the Virginia Beach municipal center on May 31 and the May 26 shooting death of a 9-year-old girl playing in a Richmond park.

Ahead of the session, Gov. Northam had submitted a package of what he called “common sense reforms” for the legislature to consider, including universal background checks, restoring a one-gun-a-month limit on purchases, outlawing silencers and high-capacity bullet magazines, restricting sales to the mentally ill and restoring authority to cities, counties and towns to ban firearms from their government buildings.

In response, Republicans sent all of the bills to the GOP-dominated state Crime Commission for study and set a return date of Nov. 18 — 13 days after the election — for the legislature to consider the commission’s recommendations.

The result is to set up a showdown on gun control as voters go to the polls to settle the question of which political party will control the legislature. 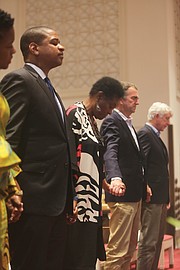 While venting frustration, Democrats consider the Republican ploy as a win. Party incumbents and candidates are hoping gun control and public safety will be a winning issue that will help them take the majority.

And behind the scenes, the governor’s leadership on the gun issue will enable him to overcome any lingering concerns over the blackface scandal that has tainted him and help the two other top Democratic officials, Lt. Gov. Justin E. Fairfax and Attorney General Mark R. Herring, who also have been dealing with their own personal conduct scandals.

Ahead of Tuesday’s session, thousands of advocates flooded into Capitol Square to promote or attack the proposed legislation. “Votes and Laws!” was one of the many chants that rose on the grounds during the rallies.

Capitol Police stayed close, and advocates on both sides of the gun issue remained peaceful. Several pro-gun rights advocates openly carried side arms and military-style weapons, which is allowed under Virginia law.

After Republicans pulled off their shutdown of the session, Democrats reacted strongly, labeling the inaction as “pathetic,” “shameful” and “flat-out cowardly.”

Gov. Northam set the tone for the party in a message that was repeated with variations by the partisans who agreed with him.

Above left, wearing orange stickers that read, “Guns SAVE Lives,” gun advocates line up to enter the public galleries in the Capitol before Tuesday’s special session. Right, three members of the Legislative Black Caucus give a power salute showing solidarity with gun control advocates Tuesday on their way to a special session of the General Assembly. From left, they are Delegates Joseph C. “Joe” Lindsey of Norfolk, Marcia S. “Cia” Price of Newport News and Lashrecse D. Aird of Petersburg.

“I called legislators back to Richmond so we could take immediate action to address the gun violence emergency that takes more than a thousand Virginians’ lives each year,” Gov. Northam stated after the shutdown.

Richmond Mayor Levar M. Stoney, a Democrat with statewide ambitions, was even tougher.

“Republicans in the General Assembly proved today that they are not just spineless but flat-out cowardly,” he stated. “By not allowing for a single vote on legislation or a single word of debate on commonsense gun control bills, they dishonored the victims of gun violence across Virginia.

“Richmond is ready to protect our children, our employees and all our residents. In November, Virginians will have an opportunity to elect state representatives who are willing to do the same,” he noted. 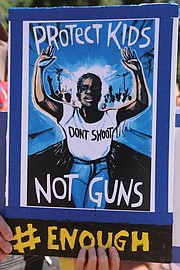 A sign held at Tuesday’s rally at the State Capitol.

“I think it’s tragic that we are not going to take any action, at least until Nov. 18,” Democratic Delegate Jeffery M. Bourne of Richmond said after the adjournment. “How many more lives are we going to lose by not enacting common sense gun safety bills into law to prevent guns from getting in the hands of people who don’t need them?”

“The Crime Commission is a widely respected, bipartisan panel known for its substantive work on matters of public policy,” Speaker Cox stated, without mentioning the commission’s nine members include six Republicans and three Democrats.

“The commission has the resources and expertise to carefully examine the bills set forward in this session, the results of the investigations into the shootings in Virginia Beach, and come back with a detailed report just as the Virginia Tech Review Panel did” following the 2007 massacre of more than 30 students and faculty at that school.

“Gov. Northam should have followed the precedent set after the Virginia Tech murders,” Sen. Norment stated.

“Having failed to follow a proven example that led to bipartisan consensus, that responsibility falls to us. By tasking the Crime Commission with this important assignment, we are establishing a thorough and reasoned process that will lead to broad consensus.”

“We all came in here with great optimism and we were defeated by the reality. And that is disappointing,” Henrico Democratic Delegate Lamont Bagby remarked.

Sheila Bynum-Coleman, who is challenging Speaker Cox in the Chesterfield County-Colonial Heights district, hopes his action will boost her chances for an upset in November.

“From calling gun safety ‘hasty and suspect’ to labeling the special session ‘an election year stunt,’ Speaker Cox demonstrated that he sides with the gun lobby over safe schools and safe streets,” said Ms. Bynum-Coleman, whose daughter was severely injured when she was shot in 2016.

“While today was undoubtedly a disgraceful day in the political history of our Commonwealth, I am confident we will persevere once we elect a pro-gun safety majority in November.”