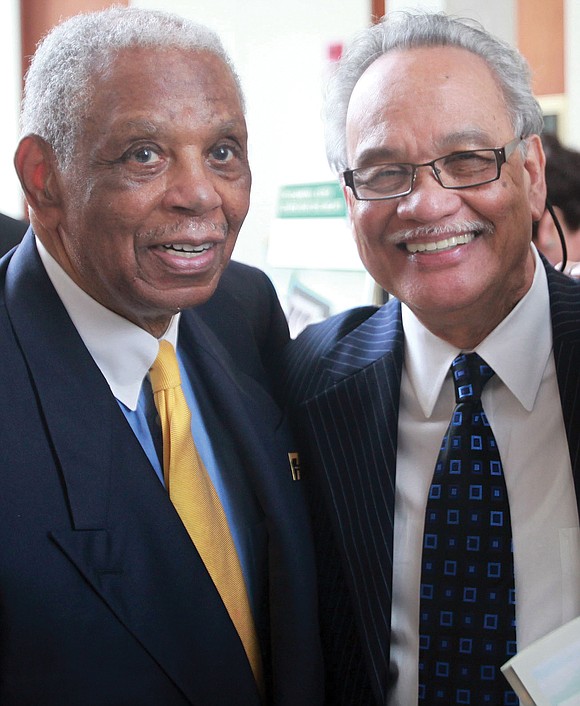 U.S. Appeals Court Judge Damon J. Keith, who decided many of the nation’s most important school desegregation, employment discrimination and government surveillance cases during his more than 50 years on the federal bench, died Sunday, April 28, 2019, at his home in Detroit surrounded by family.

He was 96 and, as a senior judge, still heard cases about four times a year at the 6th U.S. Circuit Court of Appeals in Cincinnati.

The grandson of slaves, Judge Keith, who has long ties to the Richmond area, rose from humble beginnings to become a prominent attorney in Detroit and later a civil rights icon with his rulings in high-profile cases following his appointment to the U.S. District Court in 1967 by President Lyndon B. Johnson. He was elevated to the federal appeals court in 1977 by President Jimmy Carter.

A native of Detroit, Judge Keith graduated from West Virginia State University and, after serving in the Army during World War II, entered Howard University School of Law, where he finished in 1949. He married his wife, Dr. Rachel Boone Keith, an internal medicine specialist who was born in Liberia to Baptist missionaries, at First African Baptist Church in Richmond’s Jackson Ward in 1953. The ceremony was followed by a reception at the family farm of Dr. Keith’s aunt and uncle, the Tharps, in Mechanicsville.

Judge Keith captured the nation’s attention in 1971 when he ruled that President Richard Nixon and U.S. Attorney General John Mitchell violated the constitutional rights of three radical White Panther Party members whose phones were tapped without a court order. Judge Keith said the government couldn’t engage in the warrantless wiretapping despite the three being suspected of conspiring to destroy government property.

The decision was affirmed by the appellate court, but the Nixon administration appealed and sued Judge Keith personally. The case went all the way to the U.S. Supreme Court, where Judge Keith prevailed in what became known as “the Keith case.”

“During his more than 50 years on the federal bench, he handed down rulings that have safeguarded some of our most important and cherished civil liberties, stopping illegal government wiretaps and secret deportation hearings, as well as ending racial segregation in Pontiac (Michigan) schools,” Detroit Mayor Mike Duggan said in a statement.

Judge Keith told the AP in an October 2017 interview that the phrase, “Equal justice under law,” which is etched onto the U.S. Supreme Court building in Washington, inspired him and always summoned the lessons Thurgood Marshall taught him as one of his professors at Howard University School of Law. Justice Marshall became the first African-American justice on the U.S. Supreme Court in October 1967 — the same month Judge Keith received his federal appointment.

Judge Keith did just that. In 1970, he ordered citywide busing to desegregate public schools in Pontiac, Mich. Federal marshals had to protect his home after he received death threats from the Ku Klux Klan.

A year later, he made another groundbreaking decision, finding that Hamtramck, Mich., illegally destroyed black neighborhoods in the name of urban renewal with the federal government’s help. The remedy: He ordered the city of Hamtramck to build 200 low-income housing units. The court case is still alive decades later due to disputes over property taxes and the slow pace of construction.

In a 1973 ruling, he ordered Detroit Edison to pay $4 million to African-American employees who were victims of employment discrimination. He also ordered the utility company to create an affirmative action program and for the union to pay $250,000 for failing to protect the workers.

As an appellate judge in 1979, he upheld a lower court’s decision ordering the Detroit Police Department to integrate.

“He was a jurist without fear or favor,” Judge Roger L. Gregory, chief judge of the 4th U.S. Circuit Court of Appeals in Richmond, told the Free Press on Tuesday. “He took on some of the landmark cases involving equal employment, police hiring in Detroit, school desegregation after Brown. The Pontiac school case was so controversial that he needed police protection. He was never afraid to speak truth — that we are all under the rule of law. He ruled with a sense of fairness.”

Judge Gregory noted that Judge Keith sat with the 4th Circuit in Richmond on a few occasions to hear cases.

Judge Keith, who would spend time around his July 4th birthday at his wife’s family farm in Mechanicsville, used the occasion in 2016 to celebrate Judge Gregory becoming chief judge of the 4th U.S. Circuit Court of Appeals.

He served as “an inspiration to me,” Judge Gregory said, particularly when he was first appointed to the bench by President Bill Clinton in December 2000. Because he was a recess appointment, Judge Gregory said he was uncertain if he would remain on the bench because his term would only last until the end of the 2001 congressional session.

“Judge Keith encouraged me to go forward in strength and faith and courage and to keep justice and truth at the forefront and then everything would be OK,” Judge Gregory recalled.

And it was. Judge Gregory was re-nominated to the court in May 2001 by President George W. Bush and later confirmed by the U.S. Senate.

“He always had a common touch and generous spirit,” Judge Gregory said. “He was an extraordinary American treasure. His legacy will live a long time.”

Dr. Watson, who is from Detroit, has known Judge Keith for nearly 40 years. As a young couple at Tabernacle Baptist Church in Detroit, Dr. Watson and his wife, Rose, were paired with Judge Keith, a deacon at the church, and Dr. Keith for leadership and guidance. As time and their bonds grew, the Watsons named their daughter and youngest son, Rachel and Damon after the older couple.

Later, after Dr. Watson moved to Richmond to attend Virginia Union University’s divinity school, it was “by providence,” he said, that St. Paul’s Baptist Church relocated down Creighton Road from the Keiths’ family farm. He said the church became “a place that felt like home” when Judge Keith visited Richmond.

He also noted that Judge Keith had “unbounded energy for young people.”

In 2017, Judge Keith, then using a wheelchair, did a book signing at St. Paul’s Baptist. (A biography, “Crusader for Justice: Federal Judge Damon J. Keith” by Trevor W. Coleman was published in 2013; a biopic, “Walk with Me: The Trials of Damon J. Keith, directed by Jesse Nesser, premiered in 2016.)

The week after the book signing, Dr. Watson said, Judge Keith took 40 teens from the church on a tour of the federal court in Richmond. He explained how the court system works and “how they may be interested in a future career in the law and legal system,” he said.

“It was a special moment,” Dr. Watson said. “He was not in the best of health, but he still had a lot of energy and was still getting around.”

Tributes to Judge Keith, who was a close friend of late Free Press founder Raymond H. Boone Sr. and his wife, Free Press Publisher Jean Patterson Boone, have poured in from around the nation, including from many of his former law clerks who have gone on to distinguished careers in the law, government, business, academia and civil rights. Among them is former Michigan Gov. Jennifer Granholm. According to the Joint Center for Political and Economic Studies, he has hired more law clerks of color — African-American, Latino and Asian — that any federal judge.

He received many awards and more than 40 honorary degrees during his lifetime, including the national NAACP’s highest award, the Spingarn Medal.

In 2011, Wayne State University opened the Damon J. Keith Center for Civil Rights, an addition to the university’s law school, that chronicles Judge Keith’s judicial career, the legal history of the Civil Rights Movement and the accomplishments of African-American lawyers and judges.

He is survived by three daughters, Cecile Keith-Brown, Debbie Keith and Gilda Keith, and two granddaughters.