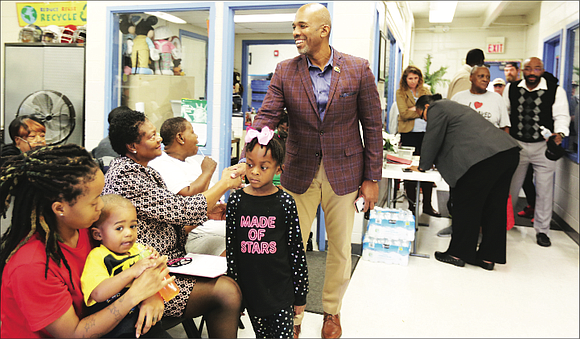 The eviction of Creighton Court residents has been halted by the Richmond Redevelopment and Housing Authority, according to housing officials who addressed the matter during a community meeting Monday evening in the Creighton Court Community Center.

“What I want to do is set the record straight. Those 24 residents will be taken care of,” said Creighton Court Tenant Council President and veteran RRHA Commissioner Marilyn B. Olds, speaking to an audience of more than 100 people who packed the room.

Those residents will be going into Richmond’s new Eviction Diversion program, according to Ms. Olds.

This marks the latest development for residents facing eviction for the public housing community.

Last week, RRHA went to Richmond General District Court seeking permission to evict up to 52 households that were behind on their rent. Before the hearing, RRHA dismissed unlawful detainer suits against 17 residents who had paid up, leaving 35 residents subject to removal, including up to nine families who owed less than $100.

The court filings, which also led to the disclosure that RRHA had stopped leasing apartments in Creighton Court, prompted a public outcry and backlash.

In response, Damon Duncan, RRHA’s president and chief executive officer, met with a small coalition of clergy and political leaders to register their concern about mass evictions.

Despite the uproar, RRHA is regularly in court seeking eviction of residents who have fallen behind on payment.

“I want to see the proof as to what they are going to be doing to make sure (those families) aren’t evicted,” said Bernice E. Travers, Richmond Crusade for Voters president, as she stood outside the RRHA headquarters on Chamberlayne Parkway.

Accompanying her to the meeting with Mr. Duncan was King Salim Khalfani, former executive director of the Virginia State Conference NAACP.

Yvette Ross, who was born and raised in Creighton Court and returned five years ago to live in the public housing community, said Wednesday that her conversation with other residents indicates a deep distrust of and exhaustion with RRHA.

That lack of faith, she said, extends beyond Creighton Court, pointing to the example of Takiyah Brathwaite, a Hillside Court resident. On Monday, a Richmond TV station reported on the trouble Ms. Brathwaite has faced after a leaking pipe flooded her kitchen.

Ms. Brathwaite reported the problem, but ultimately had to shut off the water herself. She was told she would have to pay $50 to get an emergency response from RRHA to cut off the water.