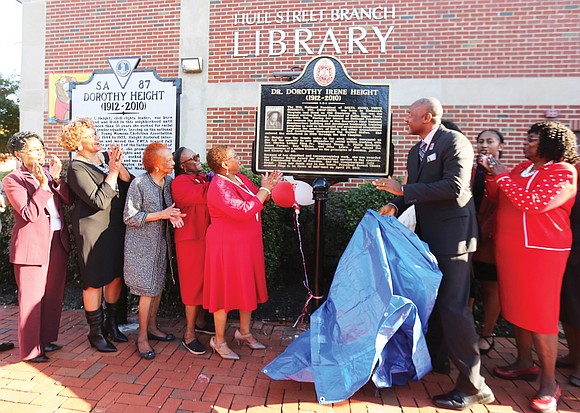 The marker, located outside the Hull Street Branch of the Richmond Public Library at 1400 Hull St. in South Side, honors Dr. Height’s service with Delta Sigma Theta Sorority. She served as the sorority’s 10th national president from 1947 to 1956, and was active with the sorority throughout her life, developing leadership training programs and ecumenical education programs. 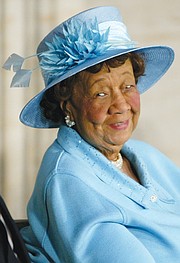 The event also included the dedication of books about Dr. Height and other African-American history-makers for the library, according to the sorority’s Richmond Alumnae Chapter, which paid for the new marker and hosted the ceremony.

Removing the blue tarp to unveil the marker is Jeffrey Randolph, Dr. Height’s nephew, while members of the sorority look on, including Richmond

The marker was to be put up in March when a state marker was unveiled detailing Dr. Height’s extraordinary role in championing the rights of African-American women as a social worker and leader for 40 years of the National Council of Negro Women.

Dr. Heights also is acknowledged as one of the top figures, along with Dr. Martin Luther King Jr., during the 1950s and 1960s Civil Rights Movement for equal rights for African-Americans. Often described as the “godmother of civil rights,” Dr. Height led the fight to improve education and employment prospects forAfrican-American women and to involve them in the political process.