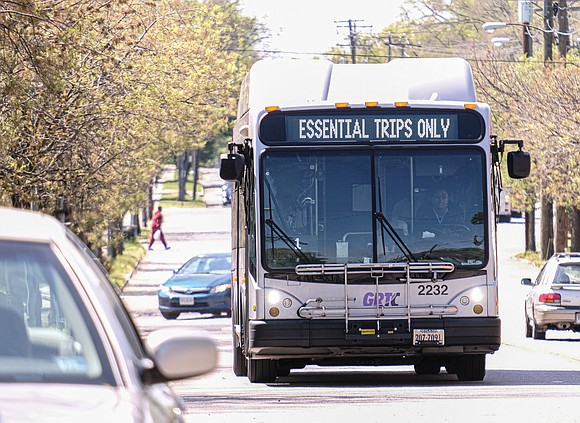 Instead of a route number, GRTC is now sending a message on its bus displays urging people to avoid riding unless the trip is necessary to get to work, a grocery store or to health care.

The purpose: To help prevent the spread of coronavirus by reducing the number of people joy riding on buses now that fares have been eliminated.

The public transit system continues to operate as scheduled on most routes as the more than 280 drivers “stand firm” and continue to report to work despite the health risk, said the Rev. Benjamin P. Campbell, president and chair of the GRTC board.

“We are very grateful for their dedication and willingness to continue this service. Without them, it would be impossible,” he said.

However, there’s a question about continued service after July 1. A flood of money was supposed to come in from an increase in the sales tax and the gas tax to help pay for transit and road construction. The General Assembly authorized Richmond and eight surrounding localities to raise those taxes and to create the Central Virginia Transportation Authority to receive the money from the state and parcel it out.

Of the projected $166 million yearly the new tax hikes were to produce for transportation, an estimated $25 million was to go to GRTC.

The prospect of new money for GRTC led Mayor Levar M. Stoney to propose cutting the city’s current $16 million subsidy to GRTC by $7.9 million in the fiscal year that begins July 1. The Henrico County Board of Supervisors also approved a 50 percent cut in its GRTC subsidy, or $4.2 million, effective July 1.

Together, the cuts represent 22 percent of GRTC’s $54 million budget — and the loss of the funding would damage the company’s abil- ity to operate if the new money from the tax increases does not arrive to replace it.

And that new money might not be available. The coronavirus has upended plans for a quick July 1 launch of the Central Virginia Transportation Authority.

Rev. Campbell said it could take three to six months to organize the new authority’s board, gain approvals from the nine local governments to raise the sales and gas taxes as allowed under the legislation and for the new stream of revenue to begin being collected.

That means it could be July 1, 2021, before GRTC sees any substantial income from the new transportation authority. That also assumes that the

economy returns to normal, another big if at this point given the concern that the country is headed for a deep recession as a result of the pandemic.

Rev. Campbell remains optimistic that both the city and the county will take action to prevent harm to GRTC’s operations. He said city and county officials understood it would take time for the new authority to begin operating and revenue collections to begin. He said there was an expectation that GRTC would continue to get city and county dollars until revenue from the increased taxes could be used to repay advances.

“I don’t think it is the policy of either government to reduce public transit service,” Rev. Campbell said.

He believes that Richmond and Henrico County governments will see that conditions have changed and address the potential funding shortfall GRTC could face if the subsidies are not restored.

He said he has communicated with members of City Council and believes efforts will be made to address GRTC’s funding needs so that service can be maintained.