Dozens turn out for free testing at city sites 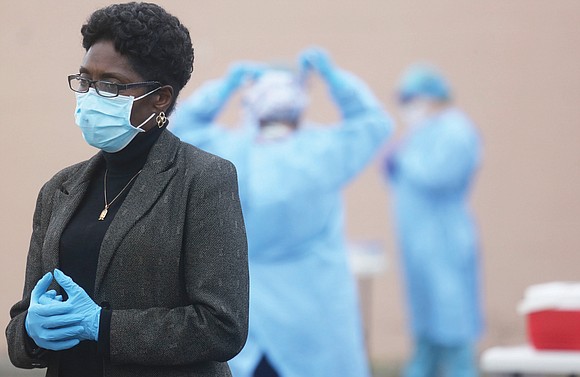 City Council President Cynthia I. Newbille listens intently during a news conference Tuesday before the opening of an outdoor COVID-19 testing site near Creighton Court in the East End. Behind her, medical personnel from the Richmond City Health District suit up to administer the tests. Photo by Regina H. Boone

Zohao Maziri took short, painfully slow steps Monday as she fought the cool, windy weather to get tested for COVID-19 at Hillside Court on Richmond’s South Side.

The 34-year-old Henrico County resident, a retail worker, began showing symptoms six days earlier of the virus that has infected nearly 15,000 people statewide and claimed the lives of 522 others.

Her pain was evident in her eyes that peered out just above the colorful mask she wore to cover her nose and mouth. State officials have urged people to wear face masks in public to stop the spread of infection.

“I have body aches, difficult breathing and weakness, as well as a difficult time working, Ms. Maziri said. “I have been self-quarantining with my husband, but he has no symptoms.”

The test completed, Ms. Maziri slowly shuffled her way out of the building in Hillside Court, the wind attempting to topple her with every small step she took.

She said she was told to follow the instruction sheet given to her by the city Health District and that her test results would be back in three to five days. She said she didn’t know if she would be hospitalized.

Among the instructions on the sheet:

• Stay home until you no longer have a fever without use of fever-reducing medica- tion or other symptoms for three days.

• Distance yourself from others while you are sick. As much as possible, stay in a specific room away from other people in your home.

• Avoid sharing personal and household items such as drinking cups and utensils; use a separate bathroom, if available.

• Restrict activities outside your home, except for getting medical care.

• Do not go to work, school or public areas. Avoid using public transportation, ride-sharing or taxis.

• Seek prompt medical attention at a local emergency room if your illness is worsening (e.g., difficulty breathing, unable to keep fluids down).

With African-Americans being disproportionately stricken and killed by COVID-19 in Virginia, public health officials responded by scheduling a series of free public testing events in low-income and predominately African-American communities in Richmond and Henrico County that began last week.

In Richmond, where about 60 percent of the 303 positive cases for the coronavirus and 13 of the 14 deaths have been African-Americans, 69 people were tested at the city Health District’s first event in Richmond held last week at Southwood Apartments in South Richmond. Twelve of them tested positive for the coronavirus, officials said.

On Monday, Ms. Maziri was one of 42 people tested at Hillside Court, where people of all ages, some using walkers and canes, lined up in front of the testing building before the 10 a.m. opening.

On Tuesday, those numbers grew, with 115 people tested for the virus in a shopping center parking lot near Creighton Court public housing complex in the East End.

Gov. Ralph S. Northam, Mayor Levar M. Stoney and City Council President Cynthia I. Newbille arrived at that test site early to see the operation and to urge people in high-risk communities to get tested.

“I hope we’re in the peak of it now, with 800-plus new cases today,” Gov. Northam said. “I just hope those numbers start going down.”

He attributed the increase, in part, to the state’s growing testing capacity, which has reached about 4,000 per day.

Still, only about 1 percent of 8.5 million Virginians have been tested. According to the state Health Department’s data, 85,307 people in the Commonwealth have been tested for the coronavirus.

At Hillside Court, Emmett Jafari brought his two grandchildren to get tested. His teenage grandson, he said, has mild headaches and other COVID-19 symptoms.

“There is so much you don’t know about this” virus, Mr. Jafari said. “I wanted to make sure I was safe than sorry.”

Ivy Turnage, 56, and Donna Barnes, 60, also wanted to make sure they are safe from the virus. Ms. Turnage said she has headaches and has lost her sense of taste, but not her sense of smell.

While Ms. Barnes said she was exposed to the virus at an assisted living facility, where she works.

“The only symptoms I had was being more tired than normal,” she said. “I just want to make sure.”

They both said getting a test would calm their fears, even as they wait several days for the results.

Everyone tested was given a COVID-19 kit containing a mask, hand sanitizer, information about the virus and condoms.

Health officials said the state lab, Virginia Commonwealth University and the University of Virginia health systems provided the testing materials, while the team that helped administer the nasal swab tests were members of the Virginia Medical Reserve Corps.

Testing will continue from 10 a.m. to 2 p.m. Thursday, April 30, at the Calhoun Center in the Gilpin Court public housing community.

Walk-up testing is available, although officials request that people call the health district’s hotline at (804) 205-3501 to make an appointment. The testing is targeted to the uninsured and underinsured who are showing symptoms of the virus.