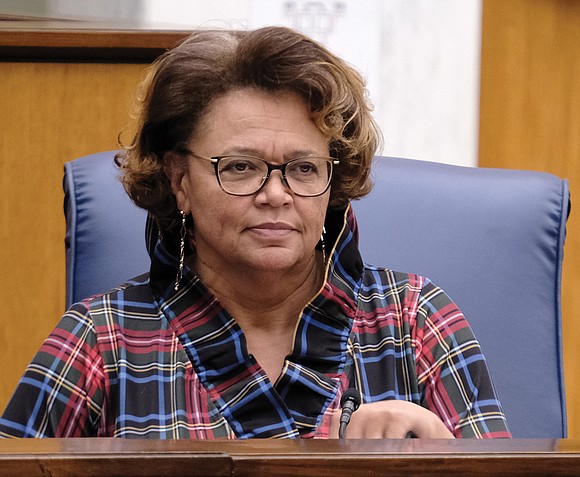 Instead of a discussion of city strategies, the hourlong meeting at the Annie E. Giles Community Resource Center saw homeless residents, advocates, supporters and others criticize how the city has handled homelessness.

Yelling and loud comments from advocates and the homeless marked the meeting and, at one point, a participant grabbed a microphone from the meeting’s leader, City Councilwoman Ellen F. Robertson, though the microphone was quickly returned to her.

Still, the uproar appeared symptomatic of a lack of faith that the city is committed to finding solutions. The location for this session appeared ideal. A former soup kitchen, the center sits on Oliver Hill Way, just a few feet away from the Camp Cathy tent city where about 100 people unable to afford housing in the city have pitched tents and are now living.

The Giles Center also serves as the city’s emergency overflow shelter to keep people from freezing when temperatures are forecast to hit or drop below 40 degrees.

But despite the location, the meeting did little to assure concerned participants, who interjected and often loudly voiced their views despite attempts from Ms. Robertson to keep the discusssion civil and “respectable.”

“This has got to be a balanced conversation,” Ms. Roberston said.

“We believe housing is a right, not a privilege,” Mayor Levar M. Stoney stated in a release issued after the meeting. “We are working with nonprofit, faith-based, homelessness and social service providers to support this community and to work with each resident individually to address their unique challenges and circumstances.”

He promised that service providers will have a presence at the Annie Giles Center to connect people at Camp Cathy with services and more stable housing.

Many who attended the meeting, though, were suspicious, given the city’s most recent response to Camp Cathy. That suspicion is based on a city letter dated Dec. 30 and sent to Rhonda L. Sneed, the co-founder of the homeless service group Blessing Warriors RVA who started the encampment with the late Cathy Davis.

Mr. Gordon said Wednesday the city currently does not have any plans to close the camp or evict Camp Cathy residents. However, he did not respond to questions about whether he planned to rescind the letter or whether the city would take any action in the months to come to remove the rows of tents.

The volatile meeting followed the release of a Point-In-Time count survey from Homeward, a regional homeless coordinating agency, that showed a 10 percent increase in the number of single adults who are homeless in Richmond. The reported increase from 497 adults to 549 was the first such increase since 2011.

Pointing to the Richmond Justice Center across the street, Ms. Sneed questioned before the meeting the city’s priorities in aiding homeless residents, as she and volunteers prepared for an influx of more homeless people.