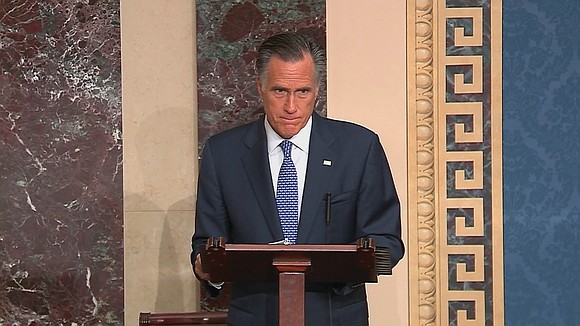 U.S. Sen. Mitt Romney of Utah is solemn Wednesday as he announces that he will break with his fellow Republicans and vote to convict President Trump on one of the two articles of impeachment. Photo from U.S. Senate TV/Handout via Reuters

President Trump won acquittal Wednesday in the U.S. Senate, bringing to a close only the third presidential impeachment trial in American history. The votes split the country, tested civic norms and fed the tumultuous 2020 race for the White House.

A majority of senators expressed unease with President Trump’s pressure campaign on Ukraine that resulted in the two articles of impeachment. But the final tallies — 52-48 acquitting him of abuse of power and 53-47 to acquit him of obstruction of Congress’ investigation — fell far short. Two-thirds of the 100-member Senate, or 67 votes, were needed to convict and remove President Trump from office.

The outcome Wednesday followed months of remarkable impeachment proceedings — in the U.S. House of Representatives, followed by the U.S. Senate — reflecting the nation’s unrelenting partisan divide three years into the Trump presidency.

What started as President Trump’s request for Ukraine to “do us a favor” spun into a far-reaching, 28,000-page report compiled by House investigators accusing the president of engaging in shadow diplomacy that threatened U.S. foreign relations for personal political gain as he pressured the ally to investigate Democratic rival Joe Biden ahead of the 2020 presidential election.

No president has ever been removed by the Senate.

A politically emboldened President Trump has eagerly predicted vindication, deploying the verdict as a political anthem in his re-election bid. The president claims he did nothing wrong, decrying the “witch hunt” and “hoax” as extensions of special counsel Robert Mueller’s probe into Russian campaign interference in the 2016 presidential election by those out to get him from the start of his presidency.

The Wednesday afternoon vote was swift. With Chief Justice John Roberts presiding over the trial, senators sworn to do “impartial justice” stood at their desks for the roll call and stated their votes — “guilty” or “not guilty.”

On the first article of impeachment, President Trump was charged with abuse of power. He was found not guilty. The second, obstruction of Congress, also produced a not guilty verdict.

Only one Republican, Sen. Mitt Romney of Utah, the party’s defeated 2012 presidential nominee, broke with the GOP.

Sen. Romney choked up as he said he drew on his faith and “oath before God” to announce his vote of “guilty” on the first charge, abuse of power. He would vote to acquit on the second charge.

Both President Bill Clinton in 1999 and President Andrew Johnson in 1868 drew cross-party support when they were left in office after an impeachment trial. Facing impeachment, President Richard Nixon resigned in 1974 rather than face revolt from his own party.

Ahead of voting, some of the most closely watched senators took to the Senate floor to tell their constituents, and the nation, what they had decided. The Senate chaplain opened the trial with daily prayers for the senators, including one Wednesday seeking “integrity.”

Influential GOP Sen. Lamar Alexander of Tennessee, who is retiring, worried that a guilty verdict would “pour gasoline on the fire” of the nation’s culture wars over President Trump. He said the House proved its case, but it just didn’t rise to the level of removing the president from office.