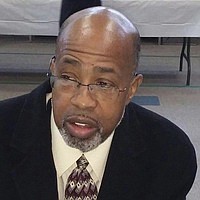 That slogan shaped the career of Dr. Aaron Lorenzo Dixon, his family said.

A lover of learning himself, Dr. Dixon sought to pass that love on to students and teachers he interacted with as a middle school principal and later as a math specialist for Richmond Public Schools.

The Lynchburg native was best known for his tenure as an assistant principal and principal for RPS, most notably at Martin Luther King Jr. Middle School in the East End.

“As a teacher, leader and ‘sometimes preacher’ to students, staff and family,” his family wrote in his funeral program, “Aaron impacted the lives of so many people, young and old. He listened to others’ concerns and problems and tried very hard to assist by coming up with solutions.”

Family and friends gathered to remember Dr. Dixon at a memorial service Monday, Feb. 10, at Tabernacle Baptist Church in Petersburg.

After graduating from Norfolk State University, Dr. Dixon taught for 17 years in his hometown of Lynchburg before joining Richmond Public Schools in 1995.

While teaching, he earned dual master’s degrees in elementary education and education administration-supervision from Lynchburg College, later added an endorsement in exceptional education from Virginia Union University. He also took graduate courses in mathematics at Virginia State and Longwood universities and earned a doctorate in educational leadership from VSU.

In Richmond, he moved from a teaching position to assistant principal in 1997 and later, in 2001, was named principal of Mosby Middle School, which was renamed Martin Luther King Jr. Middle School.

He gave up the post in 2011 because of his health issues and spent the next six years working with kindergarten through 12th grade teachers as RPS’ mathematics specialist before retiring in 2017.

Dr. Dixon received a series of honors during his career, including the Virginia Principals’ Association Outstanding Principal Award for Creativity and Leadership and the 2005-06 Educational Administrator of the Year Award, his family noted.

He also was a member of the Greater Richmond Council of Teachers of Mathematics and Kappa Alpha Psi Fraternity.