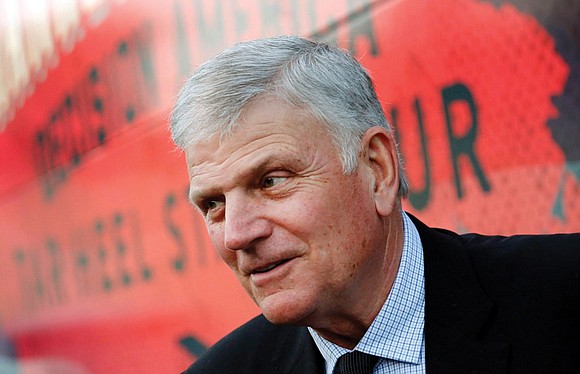 The Rev. Franklin Graham said he will seek alternative venues for a United Kingdom tour this spring after all eight venues reneged on plans to host the evangelist, saying his views on homosexuality are incompatible with the values of the British people.

Rev. Graham, who was in London on Feb. 6 to rally churches to his tour, said seven venues canceled their con- tracts with him and an eighth backed out after agreeing in principle.

“This attack on me is an attack on religious freedom and freedom of speech,” Rev. Graham told Religion News Service by phone. “For any Christian group that wants to rent a venue that believes the Bible is the Word of God, they’re in danger of being canceled.”

He said he would sue all seven sites where he signed contracts, and expected to win.

On Feb. 5, the Utilita Arena in Newcastle upon Tyne became the seventh venue to cancel Rev. Graham’s scheduled appearance. Venues in Birmingham, Liverpool, Sheffield and London also have canceled.

The tour was scheduled during Pride Month in the United Kingdom, which falls in June.

“Franklin Graham’s views are wholly inconsistent with our city, which is preparing to welcome huge celebrations and tens of thousands of people this summer for UK Pride,” Ste Dunn, chair of the Northern Pride group, said on a petition site calling for an end to Rev. Graham’s tour. The petition had more than 5,700 signers.

Rev. Graham, who has spoken out against same-sex marriage and transgender people, insisted he does not preach against homosexuality; he only calls it out as sin.

But in an interview with RNS, he took aim at Democratic presidential candidate Pete Buttigieg, the former mayor of South Bend, Ind., who is proud of being gay and is married to a man.

Rev. Graham’s U.K. tour is scheduled for late May through early June and was to feature eight venues in eight cities across the U.K.

The 67-year-old evangelist is a son of the late Rev. Billy Graham, the popular evangelist who turned evangelicalism into the dominant spiritual movement in 20th century America. The late preacher was beloved around the world, perhaps nowhere more so than in the United Kingdom, where Queen Elizabeth II awarded him an honorary knighthood.

Rev. Franklin Graham, however, has taken a far more conservative approach to evangelicalism, denouncing Islam, for example, as “a very wicked and evil religion.”

He is one of President Trump’s most prominent evangelical supporters and appears frequently at his side. Rev. Graham was at the White House recently at the unveiling of the president’s Middle East peace plan.

He said he has been in touch with many church leaders in England who have supported him and plans to return in May for the scheduled tour.

“We’ve seen a real rally of churches behind this event because of this negative publicity,” Rev. Graham said. “I think it’s helping. We have strong support from churches. We will go forward. I believe God has even a better plan.”