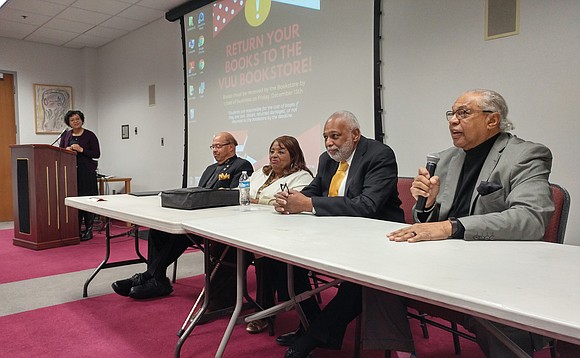 On Feb. 22, 1960, more than 200 Virginia Union University students protested the whites- only policy at the restaurant and lunch counter at Thalhimers department store in Downtown, challenging its segregationist dining policy in solidarity with similar student efforts taking place across the country.

Thirty-four of the VUU students were arrested by Richmond Police, their civil rights actions helping to push desegregation of Richmond restaurants and businesses.

The four-hour event, held at VUU’s L. Douglas Wilder Library and Learning Resource Center, largely focused on the group’s legacy and the context surrounding their actions. During a break in the event, they were presented with certificates of recognition from Gov. Ralph S. Northam delivered by Traci J. DeShazor, deputy secretary of the commonwealth.

“The 34 students were recognized as heroes,” said VUU History Professor Raymond Hylton, as he traced the students’ impact through years of local and national history. “They sparked the campaign for human dignity.”

The commemoration also marked the first year since the criminal records of the Richmond 34 were expunged. The group had appealed their convictions, which were upheld in 1961 by the Virginia Supreme Court. Their case went to the U.S. Supreme Court in 1963 with the legal expertise of attorneys Thurgood Marshall, Oliver W. Hill Sr. and Clarence W. Newsome. But the nation’s highest court remanded the case back to Virginia for a new hearing.

On Oct. 28, 1965, all of the charges against the Richmond 34 were dismissed, but their criminal records were not formally expunged until last year.

The Rev. Clarencia Shade of Newark, N.J., Mr. Newsome’s daughter, told the audience she was 6 when her father died and wasn’t able to fully understand his work before his death. But she learned how his actions and the ac- tions of others continue to be remembered in the Richmond community. Those connections, she said, speak to the larger web of relation- ships that defined the Richmond 34, from their cooperative efforts during the protest to community efforts to pay their bail following their arrest.

“Everyone played a role. Everyone had a part,” Rev. Shade said. “And today, we need to continue to follow that model to find our place so that we, too, can not only solidify but advance the cause of our own civil rights.”

Members of the Richmond 34 eagerly shared their thoughts of how their sit-in affected their lives, their activism and how they want to see it remembered and carried forward.

“I came up through a time when I suffered a lot of indignities because of this thing that we call segregation,” said Dr. Bray. “I just wanted to see change — and still want to see change.”

Mr. Foster echoed that sentiment, describing the students’ actions as a stand against injustice and power, values he said need to be imparted to the young and old at this critical time in the United States.

“It’s very important for us at this stage in the life of this country to stand up and speak truth to injustice, truth to lies and truth to power,” Mr. Foster said, “because many people who are surrounding power are more concerned about being comfortable than being committed.”

Members criticized how their alma mater has handled its relationship with the group over the years. While they acknowledged that the VUU president at the time, the late Dr. Samuel DeWitt Proctor, had worked behind the scenes to ensure their safety during and after their arrest, members said they feel the university’s support for them waned considerably in the fol- lowing decades. Their efforts had gone largely unremarked until 2010, when VUU recognized the 50th anniversary of the sit-in, the first celebration of its kind for the group.

As Ms. Rice noted, this lack of support is the reason why the group isn’t known as the VUU 34. She said the university’s celebration came years after members of the wider Richmond community had reached out to the Richmond 34 to support them and brainstorm ways to memorialize their efforts.

Potential solutions offered by Richmond 34 members and those in the audience ranged from petitioning the university to become more active in helping VUU students to learn about this history, to a memorial similar to the one North Carolina A&T State University has on its campus honoring the Greensboro Four, who are noted for their protest launched on Feb. 1, 1960, at the Woolworth’s lunch counter there.

Ms. Rice said she, with her son Marcus E. Rice, is in the process of developing the Richmond 34 Foundation, a nonprofit that would seek to im- prove the community through workplace training, scholarships and more, while keeping the memory and mission of the Richmond 34 alive.

Regardless of what shape the legacy of the Richmond 34 takes in the future, those present believe their protest and arrest left an impact on the city, the nation and their lives.

Mr. Randolph, the first protester to enter the restaurant those 60 years ago, teared up as he talked about the lasting memories, the friendships and the markers that have since been placed where the department store once stood. He said that legacy lives on in his children and grandchildren, but his father, who died 43 years ago, never lived to see it.

“The historical marker on Broad Street between 6th and 7th streets carries his name — Randolph v. Virginia,” Mr. Randolph said, his voice choked with emotion. “I wish he could have seen it.”