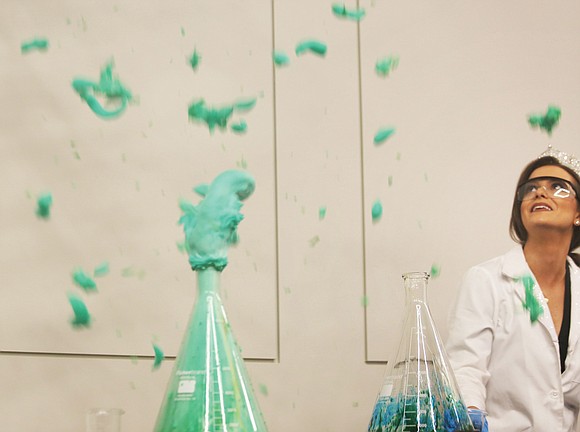 Miss America 2020 Camille Schrier stands back as her “elephant toothpaste” experiment erupts as planned with blue and green foam during a demonstration Wednesday for Carver Elementary School students at the Science Museum of Virginia. Photo by Regina H. Boone

Ms. Schrier, a 24-year-old graduate student in the VCU School of Pharmacy, shared with the youngsters the science talent that helped her win Miss Virginia in June and go on to claim the coveted national crown on Dec. 19.

Students entered the auditorium with murmurs of anticipation of meeting Miss America 2020 that heightened as they saw a table set with beakers for the experiment to come.

Miss America dazzled the crowd, replicating her competition talent for the youngsters of the colorful “elephant toothpaste” science demonstration by mixing 1⁄2 cup of hydrogen peroxide, sodium iodine, 1⁄4 cup of dishwashing soap, and a few drops of food coloring in two separate large beakers.

The liquids, one blue and the other green, simultaneously exploded with a volcanic rush of blue and green foam that shot straight into the air and overflowed from the beakers, covering the tables and landing on the floor. To the fourth-graders’ amazement, foam also stuck to the auditorium’s 20-foot ceiling.

Cheers erupted and laughs could be heard throughout the hall.

“I have loved science all of my life and loved watching Bill Nye the Science Guy,” Ms. Schrier told the students as she walked up into the gallery and asked them about the things they use or do every day that are related to science. Their answers were as varied as their interests — cooking, computers, video games, football, soccer, cell phones and tablets.

“I want to be a cook,” 9-year-old Mariah Ortiz told Ms. Schrier and the group.

Tywon Wheless, also 9, wants to be an artist.

Ms. Schrier assured them that science was in every one of their answers, and she told them, “Science touches everything we do every single day.”

She encouraged them to “take a risk and do something dif- ferent that makes you successful.” She gave a nod to Alayna Westcom, the first contestant to compete for Miss America using a science demonstration in the talent competition. That was in 2016.

“Risks makes you successful,” she said.

Ms. Schrier’s experiment was a testament to students how royalty and science truly go hand in hand.

“I want to make science exciting and entertaining and I quickly realized it was something that was needed,” Ms. Schrier told the Free Press after the demonstration.

“Right now, this is an opportune time to take advantage of my position to spread the STEM word and get kids excited.”