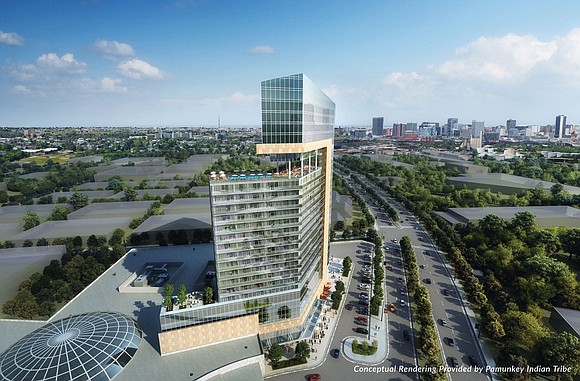 A rendering shows the $350 million, 275-room resort hotel and casino proposed by the Pamunkey Tribe on property at Ingram Avenue and Commerce Road in South Side. Courtesy of Pamunkey Indian Tribe

A Virginia Indian tribe that includes Richmond as part of the territory where tribal ances- tors lived and hunted before the English invasion is planning to make a splashy return to this modern city in the form of a $350 million resort hotel and casino.

The Pamunkey Indian Tribe, no longer confined as it had been for 362 years to a 1,200-acre reservation in King William County that nestles the river that bears the tribe’s name, announced its huge proposal Jan. 17.

According to a statement, the tribe is planning to put its gambling resort on a 36- acre warehouse and storage complex at Ingram Avenue and Commerce Road in South Side — a property once eyed for a modern city jail before the current Shockoe Valley location north of the James River was chosen.

The only Virginia tribe with the right to develop casinos, the Pamunkey stated the tribe has an option to purchase the property made up of three parcels. The tribe also has a separate option to purchase a 13-acre property at Walmsley Boulevard and Jef- ferson Davis Highway that was the site of a King’s Department Store, part of a now-defunct chain.

The tribe plans to initially use the old department store property as a training center for future casino employees and indicated that the space later could be converted into a community grocery store or health care operation.

The casino plan is not a done deal. The development currently awaits re-enactment of state legislation allowing casinos that was first approved last year. That legislation included a requirement for a referendum to allow Richmond voters to decide whether to allow casino operations.

Still, the tribe is bullish on the prospects for acceptance and eventual success.

Chief Robert Gray stated the tribe “is excited about our plans” to transform a commercial area on South Side into a high-quality gaming center to help “secure our future and provide an economic boost for the city and its residents.”

As currently envisioned, the resort would feature a four-diamond, 275-room hotel tower with views of the James River and Downtown from the upper floors. Along with a casino, the hotel also would feature a spa, fitness center and pool, high-end restaurants, a food court and at least 1,000 parking spaces.

The tribe projects the gaming resort would attract 4 million visitors a year,

Tribal spokesman Jay Smith said unlike other businesses for whom a casino is a profit center, this casino is seen as a means for the tribe to gain a revenue stream to be used for other projects, such as creating a university for Native Americans, developing senior residences for tribal elders and others and other beneficial community projects.

The prospect of the casino development appears to counter Mayor Levar M. Stoney’s refrain that Richmond’s prosperity requires the $1.5 billion Coliseum replacement project, otherwise nothing would happen in Downtown or elsewhere.

“The mayor is excited about the opportunity to bring a resort casino to Richmond,” said Jim Nolan, Mayor Stoney’s press secretary, in responding to a Free Press query about the casino plan. “We’ll wait to see what happens in the General Assembly and what it means for the city.”

If it succeeds, the hotel would shake up a relatively nondescript business area that surrounds the property and create a job-rich environment just a few blocks from the Hillside Court public housing community. It also could put pressure on the Richmond Redevelopment and Housing Authority to move on plans to transform the public housing complex into a mixed- income community.

The proposed development also raises the potential for major competition for other forms of gaming in this area, including the Virginia Lottery and Colonial Downs’ Rosie’s outlet in Richmond that is limited to offering slot machine-style games.

If approved, the casino legislation could lead Rosie’s to seek to expand to a full casino operation.

The tribe’s proposal is an outgrowth of bipartisan casino legislation that originally passed the General Assembly last year and essentially awarded the Pamunkey the right to develop casinos in Richmond and Norfolk. The tribe already has inked a deal with Norfolk officials to develop a similar hotel project if the legislature again endorses the legislation this session. The 2019 legislation required re-enactment in this session to become effective.

Despite the tribe’s nervousness about alternative legislative proposals that have emerged and call for opening the door to other casino operators, the Pamunkey have sought to get ahead of the competition by announcing their casino plans for the two cities.

In Richmond, the tribe has found one of the few large pieces of land that has adequate space for a hotel and the parking that would be required.

The tribe also confirmed that it has the money to develop the casino project. According to Mr. Smith, the tribe’s resort hotel-casino has the financial backing of Tennessee video game billionaire Jon Yarbrough, who reportedly has worked with at least 35 other tribes on 100 gaming projects.

Should the state casino legislation fail, the tribe would not have to give up its plan.

The Pamunkey, after a 35-year effort, secured federal recognition in October 2015. That enables the tribe to apply to the U.S. Bureau of Indian Affairs to have the various properties it has under option or has purchased placed into a federal trust so it could proceed.

While it takes time for a federal review, if the property were taken into a trust, the casino and the other projects could proceed without state permission.

“The tribe has agreed to wait to see what happens in the General Assembly before going the federal route,” Mr. Smith said. “We want to be good neighbors. We want the communities to benefit from what we do, and we are willing to work with the local governments and residents to create quality projects that are beneficial.”

The Tribe has set up a Facebook page called “All In for Richmond Casino” that provides details at www.facebook.com/ AllinforRichmondCasino.